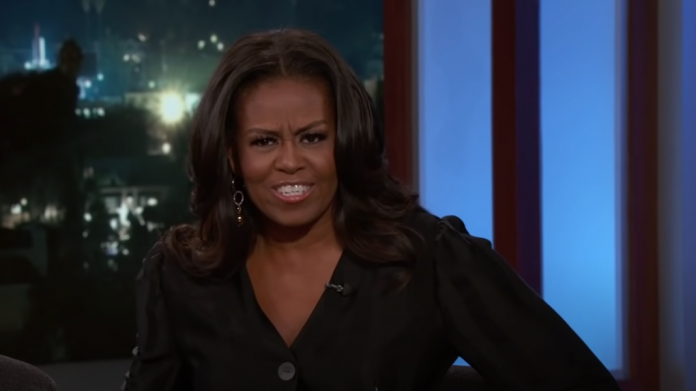 Barack and Michelle Obama refuse to ride off into the sunset.

Now the rumor mill is ratcheting up about Michelle Obama being Democrats best bet in 2024.

But Michelle Obama appeared on one ABC TV show that left many scratching their heads about her rumored political future.

The Obama’s are hellbent on maintaining their cultural perch at all costs.

It’s all the prestige they loved about the White House and keeps doors open for a return to power and explains some of why the Obamas signed a lucrative deal to produce content for Netflix, and now Michelle Obama is appearing on ABC’s sitcom “black-ish” to push her nationalized elections agenda.

On “black-ish,” Michelle Obama delivered a cringeworthy message that had everyone scratching their heads.

The Hill reported “Michelle Obama is using her cameo on “black-ish” to promote her voter registration and engagement organization When We All Vote. The former first lady announced Tuesday that When We All Vote, the effort she founded in 2018, will host a virtual watch party ahead of the premiere of “black-ish” that night. Obama guest stars on the ABC series, which is marking its eighth and final season. On the show, Obama attends a When We All Vote fundraiser with “black-ish’s” main characters, Rainbow and Dre Johnson, played by Tracee Ellis Ross and Anthony Anderson.”

Tuesday at 9:30/8:30c on ABC, @MichelleObama meets the Johnsons in the #blackish Season Premiere. 😍 Stream on Hulu! pic.twitter.com/uY0LI98NX9

Apparently the Obamas think this will keep the doors open for a rumored run for office by Michelle.

The Democrats appear ready to die on the “voting rights” hill even though it’s a nonissue to the majority of voters.

Democrats are attempting to convince Americans that voting rights are under siege.

In reality, Democrats want to enshrine and nationalize COVID voting procedures like mail-in voting, which even Democrats admitted was ripe for fraud prior to the 2020 election.

Democrats have also called voter ID laws “racist” even though 62% of black Americans and 80% of all Americans are in favor of them.

Progressives seem to think that black people are so destitute, they are incapable of securing government ID, which is essentially required to be a functioning adult in America.

The Democrats know they’re losing, so they’re attempting to change the rules in their favor.