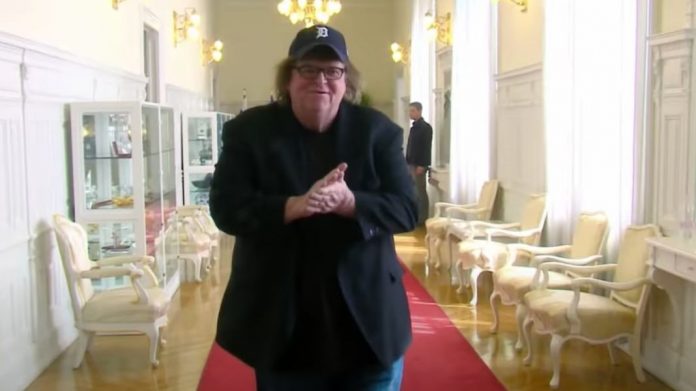 And conservatives are his primary target.

But now Michael Moore is pushing an insane conspiracy theory about President Trump that you won’t believe.

Michael Moore is best known for producing his loony left-wing documentaries like Farenheit 9/11 and Bowling for Columbine.

Especially in the field of global warming, Moore is an icon for the Left as he has pushed conspiracy theories about climate change.

And Moore has been one of President Trump’s biggest critics ever since Trump launched his presidential campaign.

It isn’t hard to find Michael Moore on MSNBC making his rounds of spreading doom and gloom about the Trump presidency.

But Michael Moore has reached a new low with his claims against President Trump.

In a rant on Facebook, Moore didn’t hold back on his attacks against Trump.

Moore on Facebook wrote, “How many lies now has the Washington Post proven in these four years? 25,000? A lie at least twice during every waking hour? Think of all the bad people you’ve known in your life. Even the worst ones you couldn’t say that about.”

Then Moore started to push his new conspiracy about Trump as he wrote, “Why on earth would we believe him today? Has he earned your trust now?”

Why would Trump all of a sudden just start telling the truth?

Trump has a history of lying about his health. His longtime New York doctor, Dr. Bornstein, admitted a few years ago that Trump dictated his perfect “doctor’s letter” during the 2016 campaign. Then there was the White House doctor who said Trump could live “200 years!” What about his lying about that emergency trip to Walter Reed “to complete his physical?” Trump also has a history of lying about his opponents’ health (like when Hillary fell ill at the 9/11 remembrance ceremony, or what he’s now been saying about Biden’s health).

So we must be skeptical. We must always remain skeptical when it comes to Trump. He may have it. But it’s also possible he’s lying. That’s just a fact.

You can see his unhinged Facebook rant in full below:

It is despicable that Michael Moore would even consider that President Trump is lying about having coronavirus.

Reports are now coming out that President Trump wasn’t doing too well Friday and he went to the hospital to reverse course on coronavirus.

But even though President Trump had symptoms of coronavirus to the point that he had to go to the hospital, the Left is still pushing wild conspiracy theories that he may not have it at all – all in the name of trying to discredit Trump.

Trump Derangement Syndrome is real, folks. And many on the Left are infected by it.

Culture Watch News will keep you up-to-date about any new developments to this ongoing story.