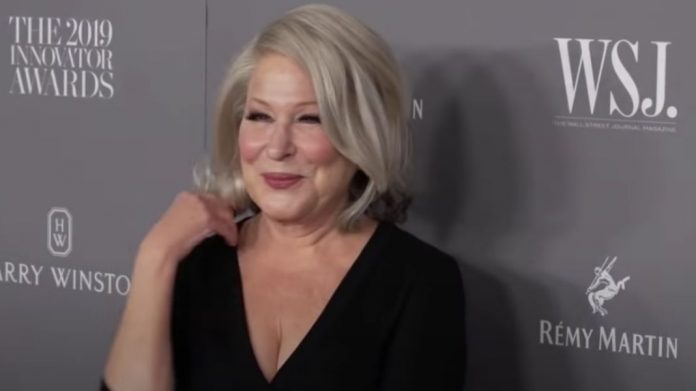 As the November elections get closer, it seems like more and more of Hollywood’s washed up retirees are coming out of the woodwork.

Most of them are coming out of hiding to attack Donald Trump in some warped fantasy of being relevant again.

And now Melania Trump was viciously attacked with racial slurs by this angry washed up actress.

Alyssa Milano, once famous for her show about being a witch continues her barely intelligible rants about the president.

And Culture Watch News won’t print here what some other washed up Hollywood leftists are saying, but suffice it to say it isn’t pro-Trump, or even pro-America.

Of course, that comes with the territory of being a Republican President.

But now, Bette Midler, who made a career of playing obnoxious, vulgar, loud-mouthed dullards, has proven she was only playing herself.

In a bizarre anti-Trump Twitter tirade, the former diva and one-time movie star launched a racially charged attack on First Lady Melania Trump during her speech at the Republican National Convention.

“Get that illegal alien off the stage!” Midler Tweeted.

The First Lady was headlining the second night of the Republican National Convention, and was delivering a very well-received speech urging Americans to unify.

And of course, Melania was making the case that her husband, President Donald Trump, is the best presidential candidate in 2020 and deserving of Americans’ votes.

She hit home the point that so many Hollywood elitists in their mansions just don’t understand. Americans actually like the bluntness and honesty of Donald Trump even if they don’t always agree with what he says.

As the First Lady said, “We all know Donald Trump makes no secrets about how he feels about things. Whether you like it or not, you always know what he’s thinking, and that is because he is an authentic person who loves this country and its people.”

So what did Midler say in response?

During Melania’s speech Midler called the first lady an “illegal alien” and then mocked her ability to speak English.

“#beBest is back! A UGE bore! She can speak several words in a few languages. Get that illegal alien off the stage!” Midler Tweeted out to her leftist fan base.

Of course, the fact that the First Lady speaks at least six languages was completely lost on Ms. Midler in her very likely booze filled Tweet storm.

But then, facts and truth never much mattered to Midler. Her Tweets have become famous for both their vulgarity and their inaccuracies.

Later on, in the night, Midler compared Melania to a mail-order bride.

“I’m surprised Trump wants to destroy the #PostOffice. He got all his wives from it,” Midler said.

Midler’s racist and sexist comments triggered immediate backlash from the Twittersphere. Her one Tweet on Melania’s speaking English had received more than 71,000 comments alone as of Thursday morning.

Of course, this racist rant by a member of the Hollywood liberal elite is nothing new.