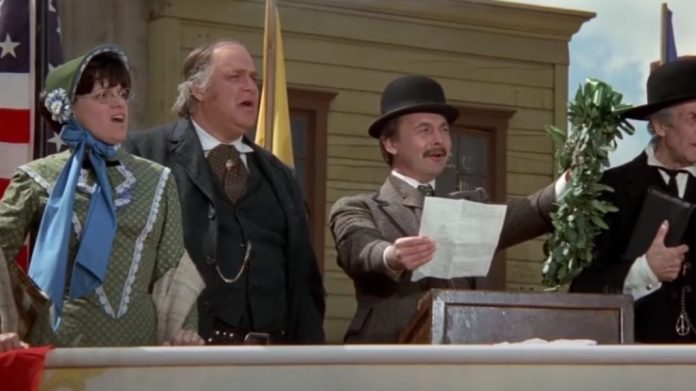 Leftists are on a search and destroy mission for anything that’s fun.

They have become relentless killjoys hellbent on turning everything “woke.”

Now Mel Brooks’ classic comedy is getting censored for an unbelievable reason.

The left-wing trend of putting disclaimers on movies and television shows – or flat-out banning them – is truly disturbing.

It’s one step away from figurative book burning.

The classic film Gone with the Wind was given a disclaimer because – lo and behold – it was made in 1939 and doesn’t conform to the ever-changing contemporary definition of “woke.”

Now the satirical comedy Blazing Saddles is getting a disclaimer because it’s just so 1974, and the Left can’t have that.

Everything must be modern-day “woke.”

University of Chicago film professor Jacqueline Stewart appears in a three-minute primer before the film on HBO Max to put the story “in its proper context.”

“As the storyline implies, the issue of race is front and center in ‘Blazing Saddles,’ and racist language and attitudes pervade the film . . . But those attitudes are espoused by characters who are portrayed here as explicitly small-minded, ignorant bigots. The real, and much more enlightened perspective, is provided by the main characters, played by Cleavon Little and Gene Wilder.”

This is infantilizing nonsense.

Anyone mature enough to watch the film should be able to understand the film without hand-holding.

The “proper context” is that audiences are supposed to laugh.

They don’t need a lecture.

But this speaks to the mentality of the Left.

On a fundamental level, freedom is a roadblock to their goals, even freedom of thought.

Audiences have understood Blazing Saddles for nearly 50 years without a “child-safe” label at the beginning of it.

And there’s no end to the Left’s lunacy.

Even ‘90s sitcoms are now “problematic,” and in five years, “woke” will be considered offensive to coma patients.

This mentality has done considerable damage to stand up comedy, and comedic art in general.

Outrage mobs cannot and will not laugh at themselves.

The Left has gone completely off the rails, and there must be a course correction.

That only happens if the silent majority stands up to the lunacy.