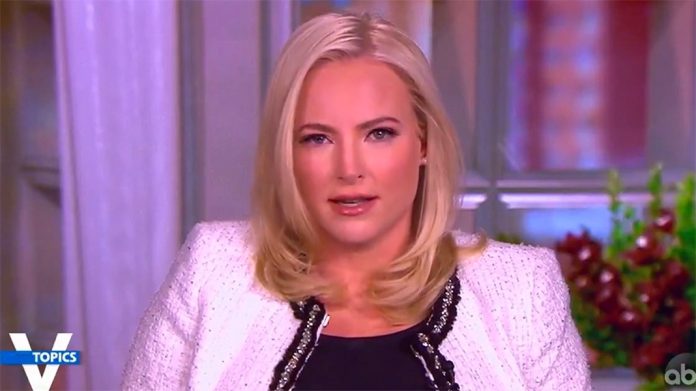 Meghan McCain is considered the resident “conservative” on the liberal daytime talk show The View.

While some don’t believe McCain is as conservative as the show tries to make her out to be, it’s hard to deny that she has been incredibly outspoken lately about her thoughts on the Biden administration.

And just the other day, Meghan McCain left people shocked by her most recent comment.

The U.S. Conference of Catholic Bishops has been making front-page news the last few days as it voted overwhelmingly to draft a document on “Eucharistic coherence.”

This document could, in essence, deny communion to public officials who support abortion.

Politicians like Joe Biden and Nancy Pelosi claim to be Catholic but support very anti-Catholic views like gay marriage and abortion.

The murder of innocent life is seen as a grave sin within the Catholic church and is grounds to deny a parishioner Holy Communion.

Many believe the move by the Conference of Catholic Bishops is a direct rebuke of President Biden – who most all of the co-hosts on The View adore – given he is the first Catholic U.S. President in nearly 60 years and is an ardent supporter of abortion rights.

Much to a lot of people’s surprise, Meghan McCain had some fiery words for President Biden.

McCain trended on social media this past Monday after criticizing Biden’s support of federal funding for abortion.

The View co-host and daughter of late Senator John McCain claimed that Biden was “doing grave spiritual harm to himself” by violating the Roman Catholic Church’s teachings.

McCain went on to say that previously several U.S. Bishops had shown support for excommunicating Democrat New York Governor Andrew Cuomo after he signed a radical pro-abortion bill into law.

These actions that appear to be directed at Biden are not anything new and shouldn’t come as a shock to liberals.

These Bishops are not attacking Biden – they are trying to set straight the teachings of the Catholic Church.

In the past, Biden supported the Hyde Amendment – a law that bans federal funding for abortions – but on the campaign trail in 2020, Biden renounced his support of the law.

In Biden’s most recent budget proposal, he removed the Hyde Amendment, which fulfilled a campaign promise to pro-abortion supporters.

Biden’s obvious shift in views is a clear result of massive pressure from the radical Left.

“If you are a devout Catholic, as President Biden claims to be, abortion is a cardinal sin that can do deep spiritual harm to you, and President Biden had been supportive of the Hyde Amendment up until 2019 when he decided to run for president,” McCain said.

McCain didn’t stop there stating that whether or not Biden gets to participate in Holy Communion is ultimately up to the church, but “he’s walking a very fine line here, and ultimately, all of these issues are literally life and death for Catholics, for devout Christians. And he’s going to have to ultimately talk to his Creator when the time comes as we all do . . .”

Pro-lifers were quick to support McCain and her comments, but of course, in the world of social media, The View co-host was also attacked by radical pro-aborts.

There is no doubt McCain shocked many who didn’t believe she was as “conservative” as she claimed to be, but all of that aside, she should be commended for her bravery. It is very rare to hear any type of celebrity speak up and defend the sanctity of human life these days.