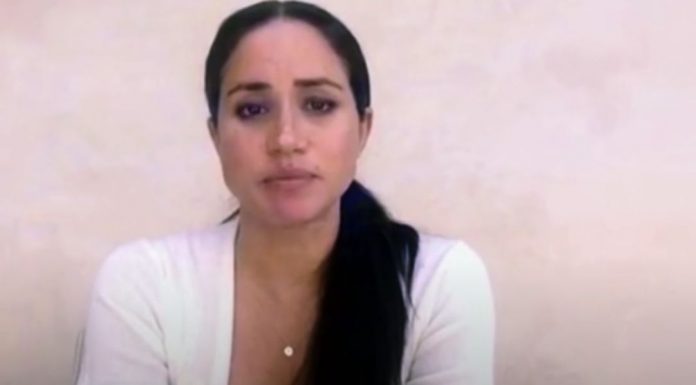 Prince Harry and Meghan Markle have done plenty to scandalize the Royal Family.

They eventually broke away from the family in a very public fashion.

Now Markle did one shameless thing after the death of Queen Elizabeth.

Prince Harry and Meghan Markle renounced their titles and broke away from the British Royal Family after claims of psychological abuse and racism.

In a viral interview with Oprah Winfrey, the couple accused someone in the family of racism, and Markle said that she contemplated suicide but only chose not to do so because Harry’s mother Princess Diana died tragically when he was young.

But now that Queen Elizabeth II died at the age of 96, Markle was front and center to lap up the attention from the press and the throng of mourners.

“Thank you for being here, it means so much to the family, WE appreciate it”

Says the woman who did nothing but torment,harass and lie about the family she married into #GoHomeMeghanMarkle pic.twitter.com/QOMlpt9Uli

It was galling for many to hear Markle refer to the family as “we” when she made such scurrilous claims against them and apparently hated the life of being a princess.

There was also an awkward moment where it appeared that Markle refused to give up ceremonial flowers.

The first aide tried unsuccessfully to take the flowers from her. pic.twitter.com/4w32pNPrek

Prior to Harry and Meghan’s disastrous interview with Oprah, Harry had always had a positive favorability rating amongst the British public.

But after the interview, public support for Harry plummeted below 50%.

Meanwhile, Markle’s had already been underwater due to her combative nature with the press.

Many people were turned off by Markle’s public display

Another commenter said, “It was this woman who said someone from the British press called her son the N word. We should never forget the lows this woman will sink to for press coverage.”

Yet another user drew a parallel to the queen’s death and health issues involving Markle’s own father, writing, “Meghan Markle’s own father nearly died of a stroke and she hasn’t even bothered to call or see him…watching her swan around Windsor shaking hands pretending to be sad after making the Queen’s final years a misery is sickening.”

It is true that Markle never visited her father, who has been critical of her behavior regarding the Royal Family.

One commenter added, “[Harry and Meghan] weren’t bothered about going to see the Queen when she was alive, many invites but refused them all! But they dare turn up to ‘look at the flowers’ when she’s died.”

Markle has been accused of being a spotlight hog in the past.

After the horrific shooting in Uvalde, Texas, Markle appeared for a photo op despite having zero connections to the community.

She also coordinated a puff piece and a photo shoot with feminist activist Gloria Steinem after the Supreme Court’s Dobbs decision.

Apparently Markle is determined to be a star one way or the other.