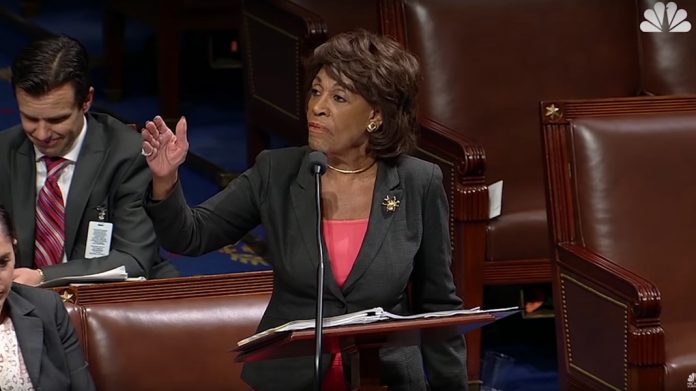 Maxine Waters has been one of the most vocal critics of President Trump.

She’s hell-bent on overturning an American election and removing Trump from office.

And she just got major reinforcements for impeachment hearings and you won’t believe who’s funding them.

As chairwoman of the House Financial Services Committee, Waters has made it her personal mission in life to impeach the 45th President of the United States.

And she’s willing to use her powers as chairwoman to probe into Trump’s finances and business dealings.

It’s nothing more than a witch hunt.

But after Attorney General William Barr released his findings regarding the Mueller probe, impeachment hearings dwindled down – for a time.

Now, the University of California-Santa Cruz is offering a course on “potential impeachment” of President Trump this spring semester.

Colleges have been a breeding ground for progressive activists.

And they’re taking it a step further to give impeachment proponents reinforcements.

The course will not only focus on impeachment, but also so-called “global warming” in regard to the “Native Uprising against the Dakota Access Pipeline” and Trump’s “neglect of duty” regarding those issues.

The course instructor is Daniel Sheehan, and, according to his own website, he graduated from Harvard Law School and Harvard Divinity School.

The worst part? University of California-Santa Cruz is a public university, meaning its funded by you the taxpayers.

So, even Trump supporters are having their tax dollars used to teach and train future progressive activists and have them reinforce Maxine Waters.

But Maxine Waters isn’t the only member of Congress calling to impeach Trump.

Rep. Rashida Tlaib, the freshman Congresswoman who made headlines as the first Muslim woman elected to Congress, was caught on video screaming “We’re gonna impeach the motherf***er!”

And while some have given up on impeachment talks even after AG William Barr’s Memo, people like Waters are not giving up.

#MuellersReport did NOT investigate bigotry emanating from the Presidency harming our country. The findings do NOT negate the President’s bigotry. As long as bigotry influences the President’s policies, I will continue to seek his impeachment. #ImpeachmentIsNotDead

President Trump doesn’t seem to be intimidated at all by Waters’ threats.

In fact, some political experts believe he welcomes them as he heads into the 2020 Election cycle.

Do you think members of Congress who call for the impeachment of Trump like crazy Maxine Waters helps or hurts President Trump’s re-election chances?