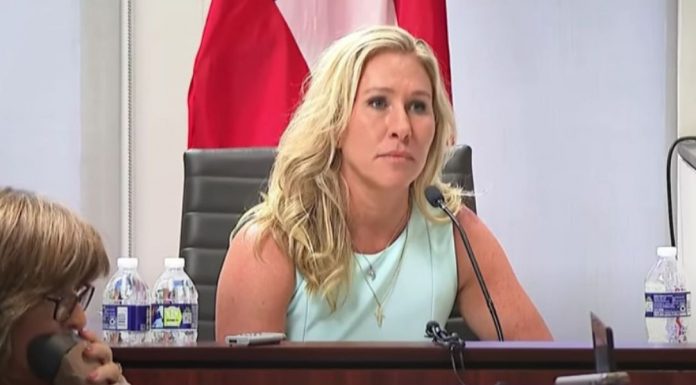 Donald Trump has literally made many leftists unwell.

And Marjorie Taylor Greene ripped one Trump-deranged actress who made a shocking threat.

Television personality, actress, and self-proclaimed comedienne Kathy Griffin might suffer from one of the worst cases of Trump Derangement Syndrome (TDS) in Hollywood.

Griffin and the fake Trump head

She once did a photoshoot holding up the bloody, severed head of Donald Trump, a stunt that even turned off many on the Left.

Amid career backlash—Griffin was fired from her CNN gig—she apologized, but later rescinded her apology after the incident blew over and the Left welcomed her back into their good graces.

Griffin also recorded herself dancing naked after one of many nothing-burgers during the two-year Russiagate hoax.

Now Griffin threatened that there would be civil war if the GOP wins in the midterm elections.

The suggestion is that if Democrats win, Republicans will accept the election results and there would be relative peace in the country.

But if the Republicans were to win in November, Democrats would descend into rage-filled violence as they did for seven months in 2020 after the death of George Floyd.

It didn’t take long for people to take Griffin to task for her insane comment.

Congresswoman Marjorie Taylor Greene (R-GA) replied, “This sounds very threatening Kathy. Americans just want their elected leaders to solve the problems that have been shoved into their lives by stupid politicians. Not your civil war. Instead, tell your governor to increase fossil fuel use so people can have air conditioning.”

Greene not only called out Griffin, but she chastised California Governor Gavin Newsom, whose state is in the midst of an energy crisis because, lo and behold, it gets hot in California.

In light of recent blackouts, Newsom said, while wearing a fleece in an air-conditioned office, “[California] is experiencing an unprecedented heat wave. This will be the hottest & longest on record for September. Our energy grid is being pushed to its max. The risk of outages is real. We need everyone to double down to save energy after 4pm today.”

Joe Biden claimed he wanted to unite the country, but he gave the most divisive speech in presidential history when he called “MAGA Republicans” a threat to the country.

He essentially demonized 74 million voters in the United States.

And Democrats like Griffin are raising the temperature by threatening civil war if they don’t get their way.