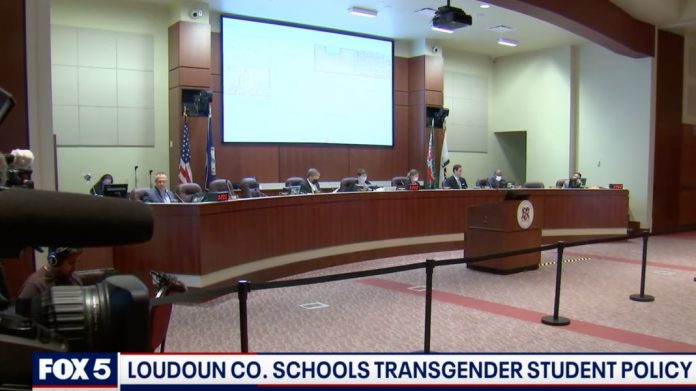 Whether you live in Virginia or not, you’ve likely heard of the Loudoun County school system.

The affluent, once largely conservative county has been making national news lately over its radically liberal school board and the outrageous agenda its members are trying to push on children.

Well, Loudoun County schools are front-page news again, and the reason this time will make your blood boil.

Loudoun County first broke onto the scene when the school board started quietly pushing a pro-CRT curriculum in classrooms.

Angry parents and taxpayers began showing up at meetings and demanding answers.

Of course, the oppressive mask mandates became another source of contention, and again, the once quiet, affluent DC suburb found itself splashed across the front page of every news source in the country.

More recently, a longtime Loudoun County school teacher tearfully tendered her resignation during a school board meeting, stating that she was a Christian and it was clear she was no longer welcome in the school system.

Her video has gone viral.

Now the school district has found itself in even more hot water with parents and teachers alike over the recent ruling that “trans-identified” students are allowed to use the bathrooms that correspond with their gender identity.

The policy also requires teachers to refer to students by their preferred names and pronouns.

Despite considerable opposition to the proposal, Loudoun County school board members voted 7-2 to approve “Policy 804”.

“School staff shall, at the request of a student or parent/legal guardian, when using a name or pronoun to address the student, use the name and pronoun that correspond to their consistently asserted gender identity,” the policy reads.

So, when a 7-year-old decides they want to be no gender and asks to be called Hitler, that’s okay?

What about the kindergartner that decides he likes boy stuff on Tuesday, but he likes girl stuff on Wednesday, and then on Thursday, he wants to be a dog?

Where does the madness end?

These are children, and it’s absolutely disgusting that adults are encouraging this type of behavior during the most formative years of a child’s life.

The policy also allows students to use the restroom or locker room “that corresponds to their consistently asserted gender identity.”

So, when the hormone-crazed middle school boy figures out he can gain entrance into the girls’ locker room just by saying he identifies as “female,” everyone will be okay with this?

Recent news articles have also pointed out that the school board has yet to estimate the cost of implementing “single-user restrooms” and outfitting some locker rooms to be “gender-inclusive.”

Taxpayers will be hit with these costs all in the name of being “woke.”

The majority of parents in Loudoun County are furious at these liberal policies being put in place by the school board, and they’re speaking out about it.

Unfortunately, the liberals who hold these school board positions have immense power, and they clearly intend to use it.

It’s high time parents start pulling their children from these government schools before it’s too late.