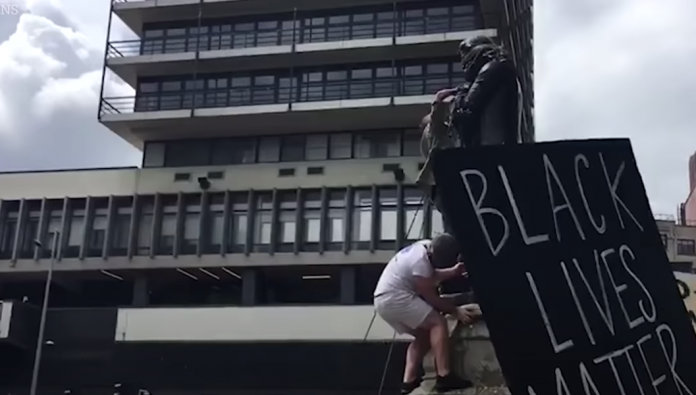 Black Lives Matter continues to spew its Marxist talking points at every turn.

In recent months the organization has come under fire for how some of its leaders operate.

And now it looks like a shake-up in the BLM leadership could spell disaster for the movement.

More and more questions have been arising about the use of the money that is donated to the Black Lives Matter organization and not just from opponents of the group, but from its own supporters.

Co-founder and executive director Patrisse Cullors seems to have a real penchant for shopping and not just for clothes.

A few months ago, reports broke that Cullors went on a real estate shopping spree, which is not something the average American can do.

It was reported that since 2016 Cullors has purchased four homes across the United States for upwards of $3.2 million.

That’s not pocket change and made most stop and look at just what Ms. Cullors was pulling down from the organization that was supposedly fighting for the rights of the average African American.

To add to that, the Daily Caller reported about three weeks ago that the BLM Global Network Foundation, the national arm of Black Lives Matter, had funneled business to an art company, Trap Heals, run by the father of Cullors’ only child.

Needless to say, many were now really questioning what was happening to the funds being donated to BLM.

In a move that shocked almost everyone, Cullors resigned abruptly from BLM Global Network Foundation with no real explanation as to why.

Cullors told the Associated Press it is so she can “focus on other projects.”

There is no doubt that this is a classic case of a leader using their position and power as head of a charity to funnel business to family and friends.

These actions by Cullors raise numerous ethical and legal questions.

It’s unlikely anyone will ever get answers unless legal action is taken because one thing the Left is famous for, and quite frankly good at, is covering for their own.

Those who support the extreme organization need to wake up and see it for what it really is – a cash cow for a few supposed “activists” that could care less about helping people in their community.

Cullors and the other co-founders are self-avowed Marxists, and at this point, the only reason they’re in it is because it’s lining their pockets.