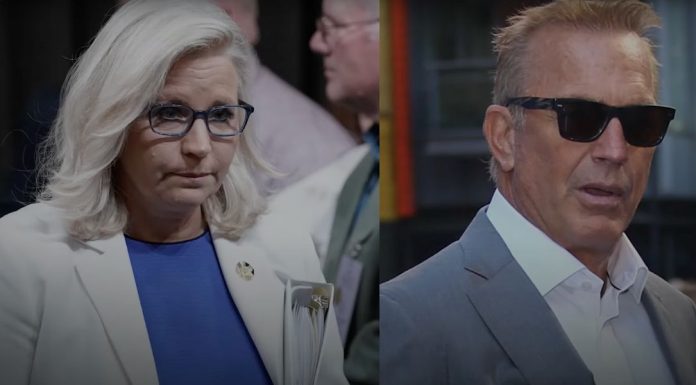 Everybody seems to realize this except for her.

And she will not recover from this savage takedown.

Congresswoman Liz Cheney has alienated herself from the Republican Party.

Her vendetta against Trump was the final straw for people on the Right.

But Cheney got an endorsement from actor Kevin Costner, who stars in the hit series Yellowstone, a show appreciated more by conservatives than liberals who continue to give it lukewarm reviews.

Costner wore a T-shirt that read, “I’m For Liz Cheney.”

Cheney tried to use the picture to rescue her fledgling political career, writing, “Real men put country over party.”

That’s laughable coming from Cheney, the embodiment of a warmonger.

“Yellowstone is a good show, but Kevin Costner is a pretend rancher in a Hollywood production shot mostly in Montana, not Wyoming,” Hageman said. “And I’d bet that if he had to work a real ranch for a day, he’d call his agent to get him out of there.”

Hageman spelled out exactly who Liz Cheney is if there were still any potential voters who weren’t clear on it.

Cheney will never be anything more than a pretend Wyomingite and she did it to herself.

Hageman went on to slam Cheney via Costner’s support for Joe Biden saying, “I’ll take the support of the people of Wyoming any day of the week over a liberal actor who voted for Joe Biden.”

Meanwhile, Hageman adviser Tim Murtaugh took to Twitter saying “this is better” above a retweet of the image with Costner’s shirt instead reading, “I’m for Liz Cheney leaving office.”

Democrats have flocked to Cheney because of her monomaniacal attempt to vanquish Trump for good.

But they don’t realize that Cheney hates Trump for different reasons than they do.

Cheney has been biding her time to take out Trump because he is bad for the GOP establishment and the warmongers.

Trump said at a recent rally, “The Cheneys are diehard globalists and warmongers who have been plunging us into new conflicts for decades, spilling American blood and spending American treasure all over the world… the Cheneys never met a war they didn’t like.”

Statements like that are why Cheney hates Trump; it has nothing to do with taking a principled stance.

The people of Wyoming are not buying her shtick either.

CNN traveled to Cheney’s home state to talk to voters, and they are not too fond of her.

When asked about Cheney’s role on the J6 committee, one Wyomingite responded, “I find her work on the January 6 committee just repulsive.”

Another said, “It’s all a hoax, it’s all propaganda…[It] has nothing to do with anything, a witch hunt.”

One respondent called out the fact that the J6 hearings are not at all adversarial, explaining, “If that was the rule of law, why doesn’t [Trump] have a defense team in that courtroom? That ain’t the rule of law, that’s a kangaroo court.”

This is so beautiful that I almost cried. It's also why I find even her horrific polls to be overstating her level of support in my former state of Wyoming, a beautiful place whose wonderful people she clearly disdains. https://t.co/tUrDZyReZk

As for Costner, he caught flak from people on both sides of the aisle.

Conservative fans of Yellowstone did not appreciate the Cheney endorsement, and people on the Left did not like the fact he was supporting a Republican, even if she is anti-Trump.

That should give Cheney a window into her political future.