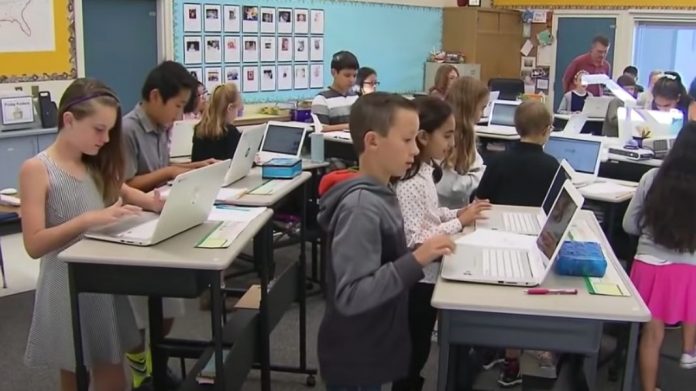 The Biden administration and their top hatchetmen proved they have it out for the America First crowd starting with one group no one expected.

The Left said it was all a conspiracy and anyone who believed it should be locked in the looney bin.

But leftists saw this disturbing news and instantly went silent about tin-hats.

There’s new evidence Joe Biden’s Federal Bureau of Investigation is targeting Conservative parents who speak out at school board meetings.

Now the more the agency tries to talk its way out of trouble, the deeper hole it digs.

And if you’ve complained at your local school board meeting lately, you’ll be infuriated when you hear who you’re being compared to.

This story blew up after Republican Congressman Jim Jordan started blasting the top federal police agency for a new “threat tag” FBI personnel were told to use to track parents who are accused of threatening “school board administrations, board members, teachers, and staff.”

Naturally, at a time when parents across the nation are way past done with Covid-19 drama and Critical Race Theory shenanigans, that information was met with instant outrage.

The FBI decided to do some damage control—and completely destroyed any illusions Americans may have harbored (thanks to Hollywood) that their tax dollars fund an elite detective agency with a brilliant grasp on human nature.

In a statement the agency explained that, “A tag is merely a statistical tool to track information and for review and reporting.”

Following a smattering of equally obvious points, the statement then dropped this doozy:

“The FBI has used tags to track everything from drug trafficking to human trafficking.”

Oh, wow, it makes us feel so much better to be grouped in with drug cartel bosses and modern sex slave traders.

What do they think parents are trafficking? Common sense? Or a focus on actual academic subjects?

Maybe parents will get really carried away and even try to sneak their kids back into class.

Democrats scoffed at all the attention directed at school board races this year, but it doesn’t look like Biden can afford to have the FBI fumble as they try to escape this scandal.

The deeper we dig into the election results from earlier this month—like in Virginia where the state flipped from blue to red—we find plenty of citizens who voted for Joe Biden, but aren’t going to put up with what’s happening in their local schools for one more year.

The question for now is whether Biden will reign in his out-of-control government or if he will wait for voters to strip his power at the polls.