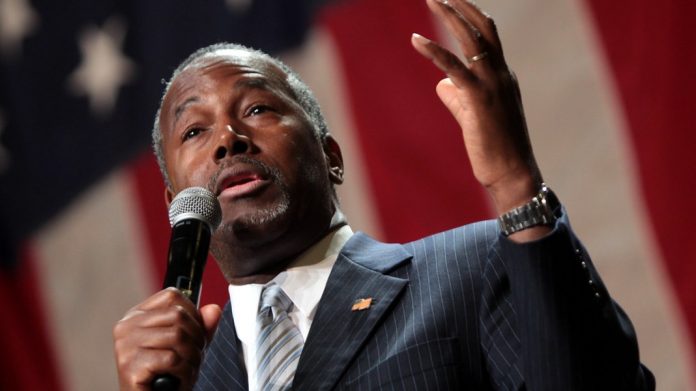 HUD Secretary Ben Carson is the latest Republican to be under attack from the Left.

Leftists seemingly choose their target by a roulette wheel.

And now they’re outraged after Ben Carson made one simple statement about women’s shelters.

A cross section of the country that comprises significantly less than 1% of the population is seemingly holding hostage the entire national debate.

He believes men who claim to be women should be banned from women’s shelters.

“I made reference to the fact that I had heard from many women’s groups about the difficulty they were having with women’s shelters because sometimes men would claim to be women, and that HUD’s policy required the shelter to accept — without question — the word of whoever came in,” Carson wrote in response to criticism of his comments.

“This made many of the women feel unsafe, and one of the groups described a situation to me in which ‘big hairy men’ would come in and have to be accepted into the women’s shelter even though it made the women in the facility very uncomfortable,” continued Dr. Carson.

Under normal circumstances, Carson’s statement would be harmless and obviously true.

It’s entirely understandable why battered women would feel uncomfortable about men being allowed into these spaces.

But leftists are always on the hunt for the most offended and “oppressed,” and for now, that’s transgender people.

Leftists are jumping on the “big hairy men” comment, but that’s a statement that was relayed to him.

Ironically, feminists are some of the most forceful critics of transgenderism because they consider it to be “female erasure.”

Recently, even radical feminists teamed up with the Heritage Foundation to hold a panel on the dangers and excesses of the transgender movement.

When radical feminists are teaming up with a staunchly conservative group, you know the issue is serious.

What do you think about Dr. Carson’s statement?

Do you think men who claim to be women should be banned from women’s shelters?