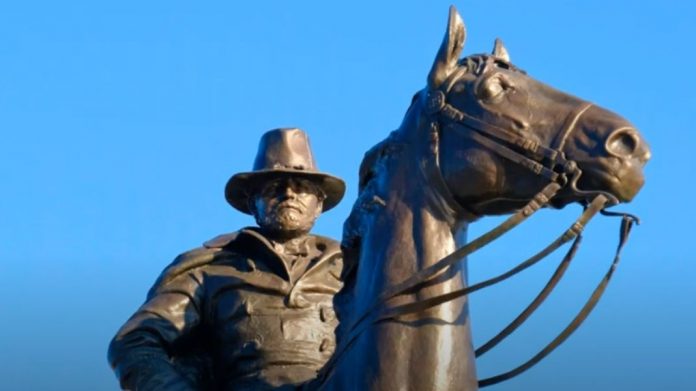 Radical leftist mobs are still on the march.

They’ve rioted, looted, and pulled down statues for weeks.

Now leftists are taking down one statue that shocked everyone.

The far Left is always waiting for a powder keg moment to advance their cause and nudge the country further to the Left.

And the shocking murder of George Floyd was just the catalyst they needed.

What began as protesting morphed into rioting and looting sprees, and now leftists have gone full Maoist and started destroying history by pulling down statues.

They began with Confederate statues, which didn’t receive much pushback – even though it was done undemocratically – but then they moved onto Thomas Jefferson and George Washington, something that Donald Trump warned against years ago.

Even the Founding Fathers are no longer safe.Since Washington and Jefferson both held slaves, they must be purged too.

But then rabid leftists tore down a statue of Ulysses S. Grant, the general who led the Union Army to victory and fought the Ku Klux Klan when he became president.

Left-wing journalists found this baffling, but they were really pulling out their hair when New York City’s Museum of Natural History said they were removing a statue of Theodore Roosevelt because it was “problematic” and promoted colonialism.

Teddy Roosevelt is one of the Republican presidents the Left actually likes because he later became a progressive and was in favor of government intervention.

Roosevelt was also a conservationist who created the national park system, but he, too, must be “canceled” because the moral betters of 2020 will cast judgment on all history.

It won’t be long before the far-left wants to sandblast Mount Rushmore.

Leftist academics have the hubris to believe that they can lead this unruly mob and rebuild society correctly where Mao, Lenin, Stalin, Pol Pot, Castro, and other communists failed.

The erasure of history should be alarming to everyone.

Some liberal journalists are finally speaking out, but the horse has already left the barn.

The inmates are now running the asylum, and the local Democrat leaders are encouraging the madness.

Socialist mayor of New York Bill de Blasio’s response to the Roosevelt controversy was, “It is the right decision and the right time to remove this problematic statue.”

It’s time for everyone to speak out against the nonsense while free speech is still permitted.

Is any historical figure safe from the Left?