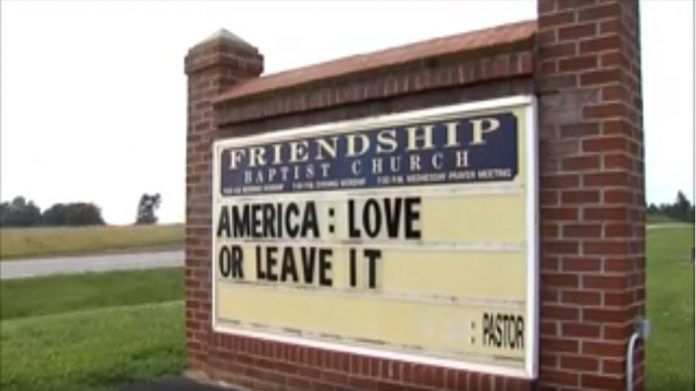 In the current era, the two things leftists hate more than anything are God and America.

So when a pastor does something patriotic, it sends leftists into a fit.

And that’s exactly what one pro-America pastor did, and now leftists are losing their minds.

Following President Trump’s recent comments about how people who hate America – despite fleeing here from other countries – should consider going back home, the Left has been freaking out.

The media are considering his comments racist, despite the fact that race had nothing to do with it.

But, as it turns out, while the media is having their fit, there are millions of everyday Americans who agree with Trump.

One of those people is Pastor E.W. Lucas, who runs a small Baptist church in Virginia.

Following Trump’s comments, he changed the sign outside his church to read “America: Love it or leave it.”

A small Baptist church in Virginia changed the words on its sign to read, “America: Love it or leave it,” in a move the pastor says is a political commentary on President Trump.

Pastor E.W. Lucas and his wife talked to a local news outlet about the sign, after it drew attention in the community and online. “I thought I was going to make some remarks regarding the situation in Washington,” he told an ABC affiliate. “It just came to me … ‘America, I love it. If you don’t love it, leave it.’”

He and his wife have been changing the words on the sign since 1979, when he founded the Friendship Baptist Church in Appomattox. “People that feel hard about our president and want to down the president and down the country and everything, they ought to go over there and live in these other countries for a little while,” Lucas added.

It was so controversial his local news came out to cover it.

But Pastor Lucas doesn’t care about the controversy.

He actually welcomes it, stating that too many pastors worry about hurting feelings.