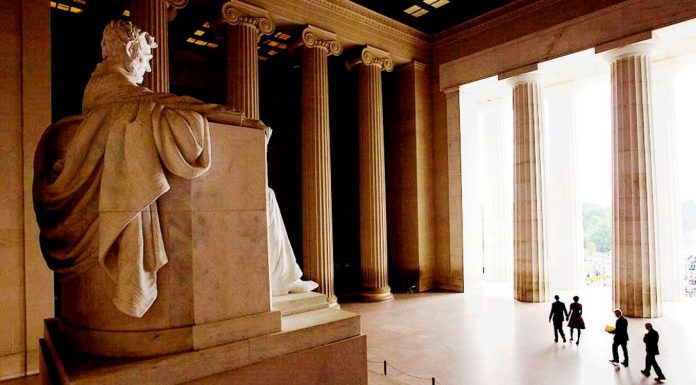 The radical Left is taking over the Democrat Party.

Liberals are cowering in silence while extremists are in the throes of a cultural revolution.

Leftist are proving once again that when given an inch, they take a mile.

There was a robust discussion about whether or not Confederate monuments should be taken down.

Donald Trump and conservatives warned that eventually the Left would go after founding fathers like Thomas Jefferson and George Washington.

Not only was Trump right, but now they’re going after Abraham Lincoln.

Mobs made up of Antifa and Black Lives Matter radicals tore down statues of Jefferson, Washington, and even Frederick Douglass during their reign of terror in the summer of 2020.

The Associated Press reported that the names of Abraham Lincoln, George Washington, and other prominent figures are slated to be removed from 44 San Francisco public schools – igniting a fiery debate over whether the leftist city has gone too far in trying to correct America’s “racist” past.

Apparently the man who ended slavery in America wasn’t “woke” enough for narcissistic leftists of today.

What’s worse is the measure passed the San Francisco school board by a vote of 6-1, meaning the radicals have a near-unanimous voting bloc in the city.

Even leftist mayor London Breed felt the move was a bridge too far considering schools are still closed due to COVID-19 protocols.

She said, “Our students are suffering, and we should be talking about getting them in classrooms, getting them mental health support and getting them the resources they need in this challenging time.”

Any sane liberals and conservatives waiting for the left-wing radicalism to run its course are going to be waiting for a long time.

Last year, there were earnest calls from leftists to demolish Mount Rushmore.

A statue of Teddy Roosevelt is being removed from the American Museum of Natural History in New York.

There is no end for the radical Left until society is razed to the ground so their “utopian” vision can be actualized.

The only way this stops is if people stand up to the radicals.

Most people don’t believe Abraham Lincoln’s name should come off school buildings, but leftists depend on the average person going along to get along.

The Left depends on compliance.

Until more people start speaking up, history will continue to be erased.