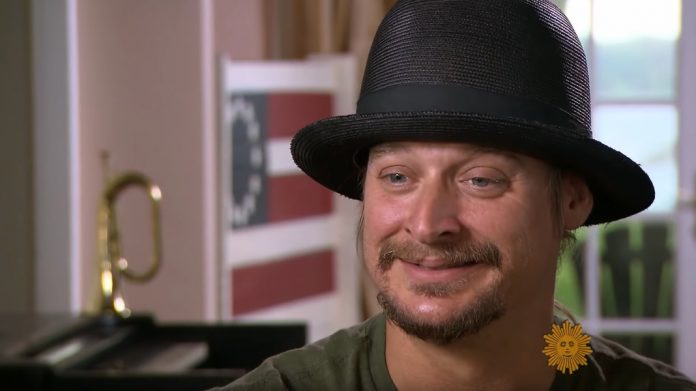 The entertainment world is known for pushing leftist messages.

But some artists are fighting back against the tsunami of progressivism.

Kid Rock is the latest musical artist to put out a song calling out the left-wing insanity that has swept across the nation.

His new single “Don’t Tell Me How To Live” takes direct aim at the wokeness that’s eroding the country with some of the strongest language yet.

Some of the lyrics read:

Years ago, we all thought it was a joke, see?
That every kid got a motherf*cking trophy.
But yo homie, here’s a situation.
A nation of p*ssies is our next generation.
And these minions, and their agendas.
Every opinion has a millennial offended.
But this amendment one, it rings true.
And if it don’t descend b*tch, then see number two.

His hard rock tune isn’t the only song calling out the insanity of the current moment.

Aaron Lewis’s country song “Am I the Only One” had a similar message of frustration with the radical turn America has taken.

And rock legend Eric Clapton released a folksy song blasting the lunacy of the COVID regime that has wrought so much damage.

The popularity and virality of these songs suggest that there could be a sea of change in the entertainment world.

That industry will always lean left, but all it takes is a few influential artists to stem the tide of insanity.

More and more musicians are speaking out.

Winston Marshall quit Mumford & Sons after expressing praise for Jordan Peterson and independent journalist Andy Ngo, who has become a nemesis for the Left due to his persistent coverage of the terrorist group Antifa.

Johnny Rotten of the Sex Pistols said Donald Trump was the obvious choice over Joe Biden.

And there are several more getting vocal.

Musicians tend to have an independent, counter-culture spirit.

Now that the Left have become the cultural scolds, plenty of musicians are itching to rebel.