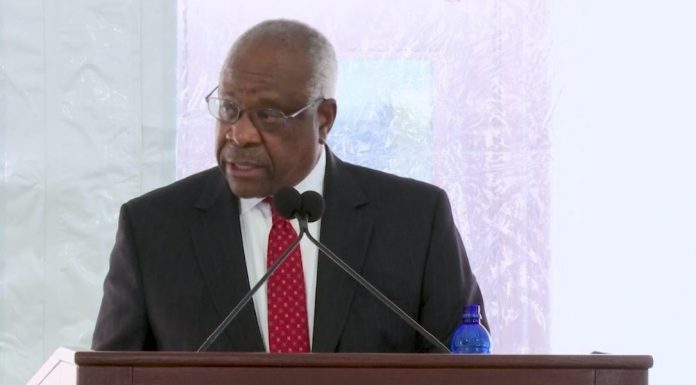 Americans just got screwed over again by the Supreme Court.

The “conservative” Supreme Court refused to hear a case about election irregularities and laws.

And Justice Thomas just wrecked leftists on the Supreme Court for denying this voter fraud case.

The Supreme Court is supposed to be a check and balance to the Presidency and Congress in fighting to protect our Constitution.

But over the last decade, the high Court has shown us that they are all in for the Left’s continued assault on our Constitution and nation.

Time and time again, the Court sides with the radicals in dismantling the founding principles of our nation.

Even the “conservative” Justices are eager to side with the Left whenever they get the chance on key issues.

Do you remember when the solid conservative and judicial textualist Chief Justice John Roberts sided with the Left and allowed Obamacare to reign as the law of the land?

Or, just last year when Justice Gorsuch and the new “conservative court” ruled to include transgenders as a protected legal class under the “definition” of sex in Title VII.

There are countless examples of conservative-minded judges continuing to make rogue decisions like these.

And if you are a conservative, the Supreme Court just sucker punched you in the face again.

The Supreme Court voted earlier this week to deny hearing all the lower court cases of voter fraud and irregularities from the last election.

Their decision sent Justice Thomas into a frenzy.

In an unusual step, Justice Thomas wrote an opinion on the decision by the Court and claimed:

The Constitution gives to each state legislature authority to determine the ‘Manner’ of federal elections. Yet both before and after the 2020 election, nonlegislative officials in various States took it upon themselves to set the rules instead. As a result, we received an unusually high number of petitions and emergency applications contesting those changes. The petitions here present a clear example.

For more than a century, this Court has recognized that the Constitution operates as a limitation upon the State in respect of any attempt to circumscribe the legislative power to regulate federal elections. Because the Federal Constitution, not state constitutions, gives state legislatures authority to regulate federal elections, petitioners presented a strong argument that the Pennsylvania Supreme Court’s decision violated the Constitution by overriding the clearly expressed intent of the legislature.

But elections enable self-governance only when they include processes that give citizens (including the losing candidates and their supporters) confidence in the fairness of the election. Confidence in the integrity of our electoral processes is essential to the functioning of our participatory democracy.

So again, the Supreme Court sides with Leftists while giving Americans another reason to question their ability to protect the Constitution of the United States.

And it’s clear that having a “conservative” Court doesn’t mean anything.

The next time a Republican Senator asks for your vote to appoint conservative judges make sure you remind them of how well that has gone so far.