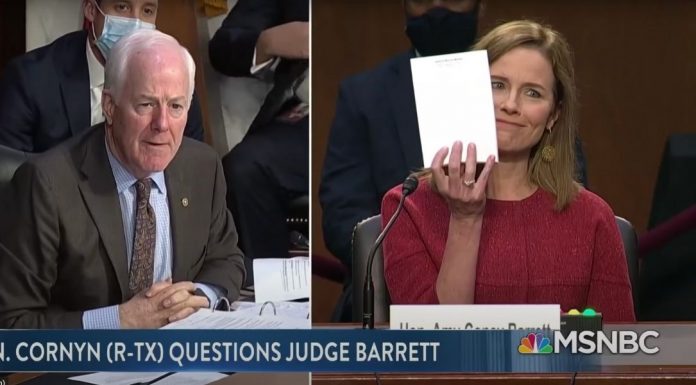 The modern Left is full of the worst venom.

They save the worst of it for the Republican-appointed Supreme Court justices.

But Justice Amy Coney Barrett got the last laugh after an author who attacked her got this bad news.

Netflix could be experiencing the “get woke, go broke” phenomenon that occurs when companies pander to far-Left progressives and alienate everyone else.

The company has been bleeding subscribers and saw their numbers drop in the first quarter for the first time in over a decade.

In response, Netflix is cutting costs, and they’re starting some of their wokest content, including a project from Ibram X. Kendi.

Variety reported that “Netflix has pulled the plug on several animated projects, including ‘Wings of Fire,’ from executive producer Ava DuVernay; ‘Antiracist Baby,’ a series aimed at preschoolers; and ‘With Kind Regards From Kindergarten,’ a film tailored to youngsters. The streaming service also scrapped ‘Stamped: Racism, Antiracism and You,’ a documentary intended to serve as a companion piece to ‘Stamped From the Beginning,’ which is a hybrid documentary and scripted feature that delves into race in the United States. ‘Stamped From the Beginning’ is still moving forward and is currently in post-production.”

Director Ava DuVernay previously created the series When They See Us, which was a wildly inaccurate dramatization of the Central Park 5 case.

She also created Colin Kaepernick’s horrendous series about his life where he compared the NFL draft to a slave auction in one absurd scene.

As for Kendi, he once argued that Supreme Court Justice Amy Coney Barrett was a neo-colonialist for adopting black daughters.

Variety added that “sources at Netflix stress the decisions not to move forward with these projects were creative rather than cost related, meaning they would have taken place regardless of the company’s slower revenue growth.”

In other words, the projects were scrapped because they were utter garbage.

Wokeness appears to be quickly going out of style at Netflix and the company seems to have recognized that it has impacted their bottom line.

The company recently announced new internal guidelines that essentially said employees could quit if they disagreed with any content’s “artistic expression.”

The guidelines seem to have been a direct response to the far-Left backlash to Dave Chappelle’s Netflix special The Closer, where he took on radical transgender activists in a poignant and humorous way.

Perhaps more companies will follow in Netflix’s footsteps if they begin to feel the crunch of going insanely woke and antagonizing people who don’t want a progressive sermon.