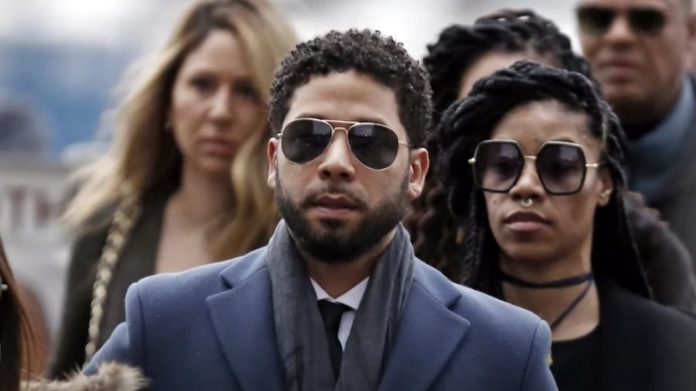 Jussie Smollett tried to fool the nation and make up a hate crime but thankfully he got caught.

And Jussie Smollett smirked for one reason that will leave you boiling mad.

Our society is ripe with virtue signaling everywhere.

Just look at the jab-me-in-the-butt Fauci crowds’ immediate transformation to Ukrainian flag emoji warriors the moment their overlords sent the memo to tamp down on raging over vaccines and masks for a few weeks.

Who knew war was the cure for COVID?

But for virtue signaling to work you also need a victim and a villain class.

For COVID, the Left made everyone wearing a mask or getting the jab a victim and called all those who just liked to exercise freedom and free will villains.

But even before the virtue signaling took off on COVID, one celebrity could see the scam orchestrated by the Left and tried to get rich quick off of it.

On a cold February night in downtown Chicago, Jussie Smollett was just minding his business trying to go home to eat a footlong in the middle of the night when out of no where two country hicks came out of no where with a noose and threw it around his neck, while yelling gay slurs at Smollett.

Oh the story was horrific!

Two country bumpkins with Trump hats on were patrolling the streets of downtown Chicago looking for Smollett at 3 am in arctic weather, knowing exactly who he was and that he was gay from his apperances on the TV show Empire.

The media just couldn’t believe the story as it was too good to be true for them. And despite sheer lunacy required for it to be true – they ran with it anyways.

And the Left just ate up the narrative that Smollett was throwing down.

But boy did they get their facts wrong.

We all know how it went down.

Smollett hired two black guys to stage a fake hate crime. And he sucks so much as an actor he couldn’t even act well enough not to make the cops suspicious that night.

And for his crime of filing a false police report and costing Chicago taxpayers wheelbarrows full of money for a fake manhunt, he was convicted and sentenced to 150 days in jail.

Well low and behold, an appeals court in Illinois has just sprung Smollett out of jail.

BREAKING: Convicted actor Jussie Smollett has been ordered released from jail pending appeal of his 150-day sentence imposed last week for staging a hoax hate crime on himself.

Smollett’s lawyers claimed that “Mr. Smollett has become the target of vicious threats in the social media forums which no doubt reflects the hatred and wish for physical harm towards Smollett which he may experience during incarceration” in their filing with the appeals court.

“Mr. Smollett anticipates he will most likely be assigned to segregated incarceration or protective custody, both euphemisms for solitary confinement; a situation which could have extraordinary damage on his mental health,” the filing continued.

And just like leftists, the appeals court bought it and took the bait.

Now Smollett is free to walk the streets after being convicted of a crime.

And all this while some Americans who did little more than visit the US Capitol on January 6, 2020 are still rotting jail cells without a conviction as they await trial.