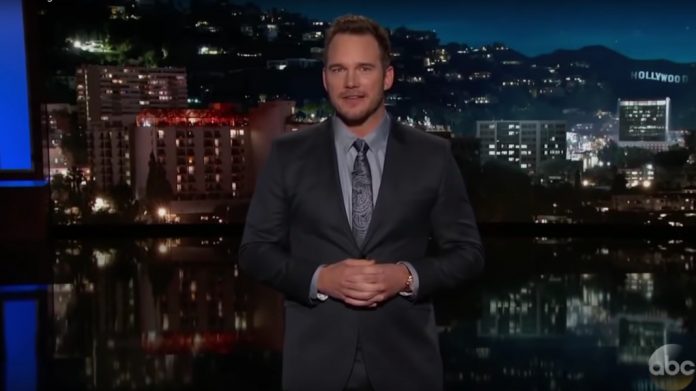 Hollywood does everything they can to silence Christian conservatives.

But, every once in a while, a Christian in Hollywood will stand up for their faith.

And this Hollywood actor just bravely went off script to preach the gospel for thousands to hear.

Chris Pratt, famous for his roles in “Guardians of the Galaxy” and “Jurassic World,” is a devout Christian.

He was recently invited to read from the Gospel of Luke for Disneyland’s candlelight ceremony that is put on every year since 1955.

But at the end of the ceremony, he went off script to describe the love that God the Father has for his people.

Aside from the reading of Luke’s Gospel, Chris Pratt went off-book after the curtain call to deliver a heartfelt message about God, drawing from his own experience as a father.
“Ladies and gentlemen, it was really my honor to share this beautiful Candlelight ceremony with all of you,” Pratt began. “It’s been a very special and inspiring night. For me, being a parent has really changed my life in so many ways. And one of those ways is to understand, truly, the love that a father could have for a child.”

Chris Pratt then pointed out his own child in the audience and talked about the “pure” love he unceasingly feels.

“When I stare at this precious little creation of mine here, and I watch the ways in which he tries to please me, I just fill with a love that I feel is so pure, and unending,” Pratt continued. “The way we love our children, the more we love our children, the more we will understand the capacity for our Father in heaven to love us. Each and every one of us a precious creation, and he just marvels in the ways that we can try to please Him. That should give us a great deal of comfort. I know it does for me.”

Chris Pratt’s bravery to go off script during a Disney tradition of more than 60 years is noteworthy.

He could have just as easily followed the status-quo, but he wanted to make sure everyone could conceptualize the real love that the Father has for His people.

This isn’t a one-off affair for Chris Pratt either.

At award shows he professes his faith in God when no one else will.

And in countless interviews he makes it clear that he is a Christian that puts Christ first in his life.

The so-called “progressive” Hollywood hates the fact that a devout Christian is one of the most successful actors on the face of the planet.

They would prefer Pratt stay silent and mouth the same cliché leftist propaganda that the rest of them do.

But his charisma and favorability in the public eye is undeniable, and Hollywood is forced to continue to begrudgingly employ him.

Do you think Hollywood actors should be allowed to profess their faith? Let us know in the comments below.