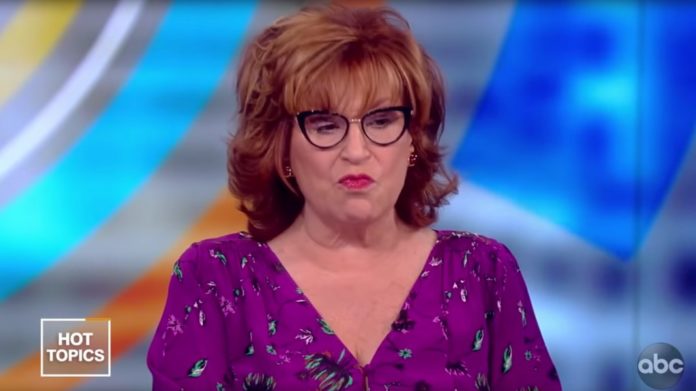 Few Leftists have gone after Trump and his supporters like co-hosts of The View.

And often their attacks go unchecked.

But Joy Behar ruthlessly attacks Trump supporters on The View then she gets destroyed by her co-host.

When Trump supporters go on The View they face a Leftists firing squad like not seen in many places on television.

Whoopi Golberg has called Trump a wannabe dictator and told his supporters to suck it up over the election.

Even Megan McCain, the “conservative” on the show, has done her fair share of attacking President Trump in what looks like a vendetta for her deceased dad.

But the co-host with the worst attacks by far is outspoken Joy Behar.

Joy has even written a book called The Great Gasbag: An A-to-Z Study Guide to Surviving Trump World.

And with this crew of Trump-hating co-host on The View, there is rarely a check against an attack on Trump and his supporters.

But Joy Behar went after Trump supporters and she was attacked by the last person you could imagine.

It all started with a conversation about Trump’s phone call with Georgia Secretary of State Brad Raffensperger where he asked him to “find 11,780 votes,” which has Leftists going nuts.

Fellow co-host Sunny Hostin claimed that Trump was “trying to stage a coup” with Behar claiming it was “treasonous.”

But then Meghan McCain fought back against that claim.

Meghan responded by saying “I don’t think he’s trying to stage a coup. He’s ranting and he’s pissed off because he’s irrelevant right now and Biden’s about to take his seat in the office. I think people are taking this way too seriously right now.”

Baher then turned her sights on Trump supporters by claiming “his people, whoever they are,” are “disenfranchising Black voters.”

Meghan then reacted by saying, “the rhetoric in the media needs to be more respectful of Trump voters. I think that’s how we got to this place to begin with. Going forward in 2021 I think we need to be respectful of the 70 million Americans that, for whatever reason, did not feel that they could, in good faith, pull the trigger for President Biden and Vice President Harris.”

Baher responded, while growing angrier by the second, by saying that Trump supporters are being “lied to” and “getting their news from other than legitimate sources.”

Meghan again fought back with “No, I don’t. I think that’s fake news!”

Who knew that Meghan McCain would ever be seen as a supporter of Trump voters?

Guess that goes to show just how far to the Left her fellow co-host really are.