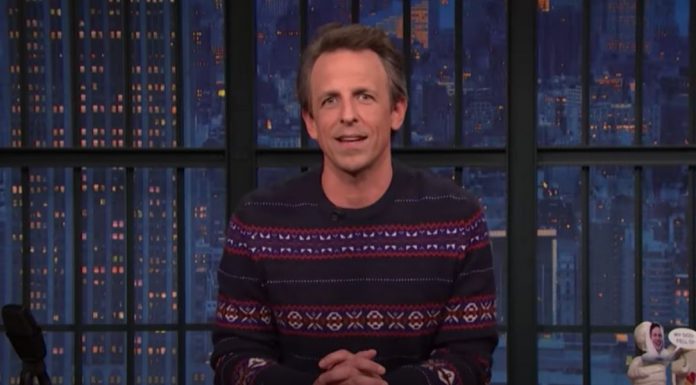 Remember the days of Johnny Carson, when Late Night shows were funny?

But Johnny Carson would really be aghast after what just came out of this Late Night show host’s mouth.

NBC's Seth Meyers claims he doesn't want to spend day after day obsessing over Trump, but is forced to because he's so bad: "Look, you guys, I don't want to talk about Trump, but I shouldn't have to. Normally, when someone stops being president, they go away…" pic.twitter.com/W7UjhRubn5

While trying to mix in some unfunny, lazy jokes, Meyers admits he’d like to move on from Trump and actually perform some comedy – something Meyers’ might not be capable of.

But according to Meyers, the stakes are just too high.

“Look, you guys, I don’t want to talk about Trump… but we can’t just move on and forget about it, because either Trump or someone even more ruthless will come along and try it again in 2024,” Meyers said on his low-rated show. “And the GOP is already laying the groundwork for the next coup as we speak”

Not sure what evidence the former “anchor” for Saturday Night Live’s Weekend Update has of a GOP coup – since he doesn’t present any and none exists.

Instead, night after night, show after show, Meyers relentlessly talks about debunked “crimes” Donald Trump supposedly committed while in office.

But SNL alumnus Meyers is far from alone in putting his political beliefs before laughs.

Stephen Colbert, Jimmy Kimmel, James Corden, Trevor Noah, John Oliver and Samantha Bee have all given up on trying to be funny.

Though, many would argue they wouldn’t be funny even if they tried, the entire late night lineup is preaching politics instead of making jokes.

They’re alienating half their audience and acting surprised that their ratings are in the toilet.

On the old Daily Show, host John Stewart would at least mix in comedy with his political commentary that would almost always lean left.

But the difference is, Stewart was funny about it, even if you disagreed with the point he was making, you’d giggle while dissenting.

Today’s collection of woke Social Justice Snowflakes masquerading as comedians are lucky to be funny or even entertaining accidentally.

But at least now Meyers is admitting where his priorities lie – promoting a radical agenda and policies more laughable than any joke he tells on his program.

No wonder Conservatives are migrating to other outlets like Fox News’ new late-night show Gutfeld.