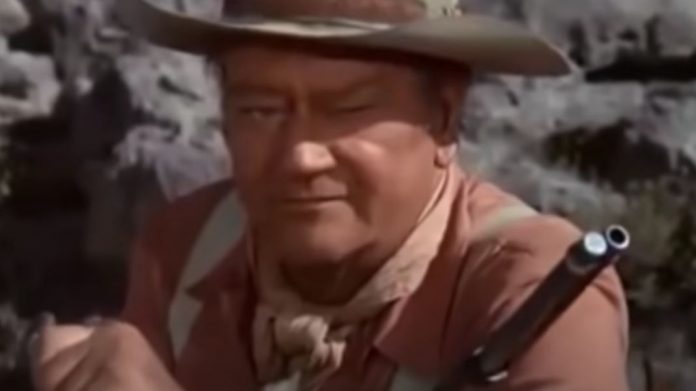 As “cancel culture” leftist radicals attempt to tear down or rename anything they don’t like, they’ve now set their sites on America’s all-time favorite actor.

But the people of Orange County, California are drawing a line in the sand onthis one.

Because now John Wayne is in Democrats’ sights as the Left goes fully unhinged with these attacks on the “Duke.”

As recently as 2016, the most popular film actor of the 20th century, John Wayne, remained in the top five on The Harris Poll’s annual list of “America’s Favorite Movie Stars” (he dropped to number 7 in 2017) but remains in the top 10.

More than 40 years after his death, Wayne is the only late actor in the top 10 who has never fallen out in over well two decades.

“His personality on and off screen embodied honorable virtues that continue to resonate with the American people today. We are proud that he remains an emblem of all that it means to be not only a good citizen but a good person.”

While he is most famous for his Western roles, Wayne in fact starred in just about every genre of film. In all he appeared in more than 175 films during a 5-decade acting career.

His breakout role came in the John Ford classic Stagecoach in 1939 and Wayne appeared in more than 20 of Ford’s films throughout his career including The Quiet Man and The Searchers, which fans continue to argue were two of his finest performances.

Over his career, Wayne starred alongside some of the biggest name in Hollywood including Maureen O’Hara, Jimmy Stewart, Dean Martin, and Natalie Wood. He was nominated three times for the Academy Award, winning the Oscar for Best Actor in 1969 for True Grit.

Wayne was also well-known for his strong patriotic and conservative views and counted Ronald Reagan as a close friend.

While his name lives on through his life’s work in Hollywood, he continues to make an impact through The John Wayne Cancer Foundation, whose mission is to bring courage, strength, and grit to the fight against cancer.

Ethan Wayne continued, “It means so much to us that the world continues to hold the John Wayne name in such high regard.Our hope is that his legacy will be used to help those in need. At the heart of everything my father did, he understood that the most important part of the fame he was given was to find ways to help others.”

But now, the Democrat Party of Orange County wants to send the “Duke” packing.

Party leaders are demanding the removal of his name from the John Wayne Orange County Airport due to “racist and bigoted statements” that the Hollywood legend allegedly made in a 1971 magazine interview.

Last week, in a strongly worded resolution, Democrat leaders called for John Wayne Airport in Santa Ana to scrap the John Wayne moniker and revert back to its original name, Orange County Airport.

“Orange County is now a diverse region far different from the time when JohnWayne was chosen as namesake for the airport,” the Democrats said in their resolution.

While there have been several failed attempts to rename the airport, never before have racial tensions and cancel culture hysteria been so high.

It seems renaming syrup and pancakes, rice, and tearing down statues of Catholic saints and U.S. presidents isn’t enough for these “heroes” of the revolution.

The party said the removal of racist symbols “provides a necessary process for communities to remember historic acts of violence and recognize victims of oppression.”

John Wayne Airport was given its current name in 1979 in honor of the True Grit actor who died that year just after his final movie The Shootist. He was along-time local resident with a home in Newport Beach.

Wayne’s children are working with thousands of fans to stop the renaming efforts, but this may be a battle already lost.

Orange County was once a conservative Republican stronghold but has turned drastically to the Left in the last two election cycles.

That, combined with the rush to tear down and rename anything not approved by the Antifa mobs, could spell the end to John Wayne Airport.