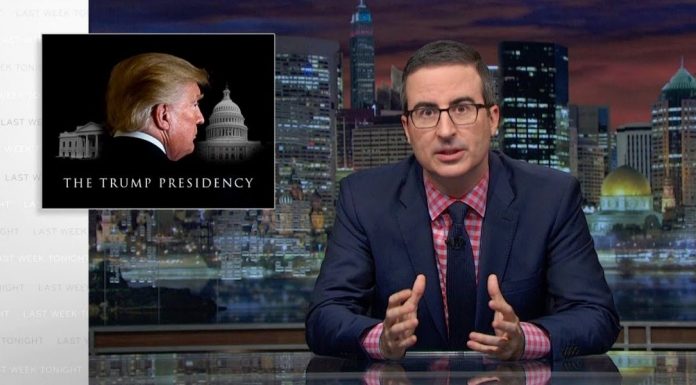 They use their platforms to prattle on about left-wing politics nonstop.

But John Oliver said something about elections a few years ago that just came back to bite him.

John Oliver, like all the other interchangeable left-wing talk show hosts, uses his HBO show to present arguments out of context to bash the Right and push an agenda.

However, Oliver told an inconvenient truth that came back to bite him.

In light of Joe Biden’s tenuous election victory, Democrats have been swearing up and down that voting systems are beyond reproach despite mounting evidence of voter irregularities with both mail-in ballots and voting machines.

But back in November 2019, Oliver aired a lengthy segment on his show talking about how voting machines are not fully reliable.

He railed against Direct Recording Electronic (DRE) voting machines and said, “They are very bad. If something goes wrong with one of them, you would basically never know, because you can’t audit the results. And things have gone wrong . . . In one local New Jersey election, a husband and wife were both running for seats on their county’s Democratic committee. The DRE machines said that they lost, but they were in the unusual position of actually knowing that that was a mistake.”

The segment goes on to describe how the husband and wife in question got sworn affidavits from the incredibly small voting pool in their local community to prove they won.

“And it’s not just New Jersey,” Oliver continued. “In 2016, 20 percent of voters voted on paperless DREs, and an estimated 12 percent will use them in 2020, meaning 16 million Americans, spread out across all these states, are set to be voting on machines that pretty much everyone agrees are deeply, deeply flawed . . . And if they malfunction, there could be no way of knowing, which is absolutely terrifying. What we have to do here is obvious, it’s so obvious, in fact, even this guy understands it.”

The segment then cut to Donald Trump stating that there needed to be a paper backup system to ensure voting integrity.

Now that the 2020 election has passed, Oliver has been largely mum about questions of voting impropriety, as have other Democrats who said the election was in jeopardy.

The Democrats got “their guy” in, and they don’t care how it happened.