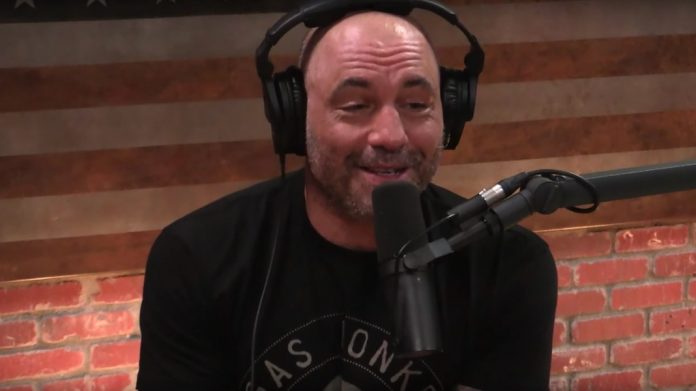 Joe Rogan is the host of one of the most downloaded podcasts in the United States, a UFC commentator, and comedian that both sides of the political spectrum have found respect for.

But his most recent statement on air may lose him a lot of left-wing fans.

And Joe Rogan just issued a huge threat to California and Hollywood that will make your jaw drop.

Rogan’s podcast is listened to by millions of fans across the political spectrum.

In terms of “listenership” on YouTube and iTunes, he reaches more people than CNN and other mainstream news outlets do.

Which is why his podcast has become so influential.

Normally, Rogan’s podcast covers topics such as the UFC, music, comedians, and even aliens.

On some occasions, it does delve into politics.

One of Rogan’s most recent podcasts discussed the COVID-19 crisis and how outrageous California and Los Angeles County’s lockdown regulations have become.

LA county has decided to extend the shelter-in-place orders until late July, shutting down comedy clubs and halting nearly all activity in the city.

Rogan expressed a great deal of frustration about the orders and proceeded to threaten leaving California to avoid the taxes and live in a freer state such as Texas.

Rogan said, “I might move to Texas . . . Here’s the thing. If California continues to be this restrictive, I don’t know if this is a good place to live. First of all, it’s extremely expensive. The taxes here are ridiculous. And if they really say that we can’t do stand-up until 2022 or some shit like that, I might jet. I’m not kidding.”

His only hesitation was leaving so many of his friends behind.

But he did mention how other comedian friends of his have expressed a desire to move as well.

If Joe Rogan left California he could completely uproot the comedy scene in the state.

He would also be a member of the growing movement of people leaving California to escape the high cost of living and high taxes.

Should Joe Rogan leave California and move to Texas for lower taxes and more freedom?