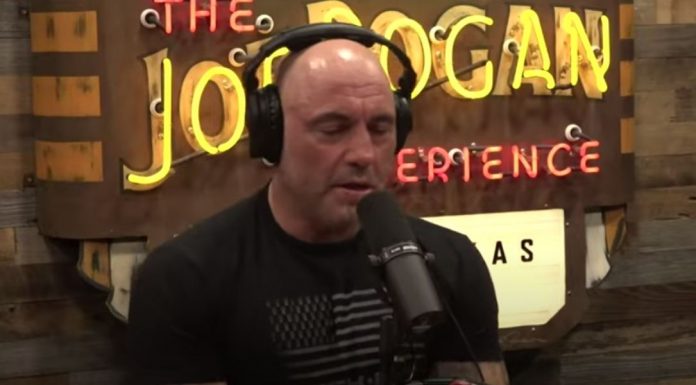 The Left is intent on canceling Joe Rogan.

They can’t stand that he has the biggest podcast in the world and refuses to hew to establishment narratives.

And Rogan appeared in one video that enraged leftists.

Even though Joe Rogan leans Left on several political issues, he has become persona non grata because he refuses to bow to the authoritarian progressives.

Rogan signed a deal with Spotify reportedly worth $100 million, and leftists at the company have been trying to “cancel” him since.

Radical transgender activists within Spotify tried to have Rogan booted for having conservations with experts who are skeptical of the transgender industry.

Now Rogan has drawn the ire of the left for appearing in a short film promoting the idea of freedom against the tyrannical COVID regime.

Rogan promoted the video on Instagram to his 13.2 million followers.

Rogan’s voiceover was lifted from a recent episode of his podcast.

Rogan made the astute point that the government almost never gives back freedom once it has been taken away:

“As soon as you give politicians power, any kind of power that didn’t exist previously, if they can figure out a way to force you into carrying something that lets you enter businesses or lets you do this or lets businesses open, historically, they are not gonna give that power up.”

COVID has represented one of the most authoritarian moments in modern American history.

It’s the closest thing to communism most Americans have ever seen: supply shortages, top-down edicts, censorship, and harsh corporal enforcement.

“They find new reasons to use it. We have to protect those freedoms at all cost, whether you agree with people’s choices or not, because it is the foundation that this country was founded on: freedom . . . It is the literal structure that allows this country to be so f*cking amazing. Anything that comes along that can inhibit your freedom is, by definition, anti-American.”

It’s dismaying that Rogan’s message even needed to be said, but it did.

Leftists have become too comfortable with totalitarian control.

One Australian commenter on the video drove home that point:

“Take it from an Australian you don’t want what is happening here.”

Australia has gone full 1984 in its approach to enforcing COVID crackdowns.

Unfortunately, there are tens of millions of COVID regime enforcers among the public.

This reply shows the depths of the COVID regime’s propaganda.

The lie that Rogan took horse dewormer continues to circulate.