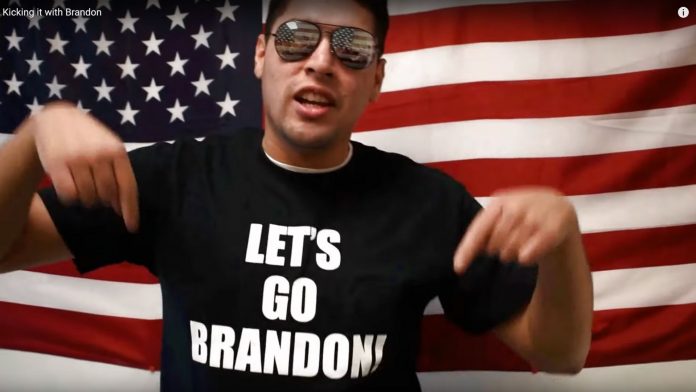 Joe Biden’s presidency is an embarrassment and everybody knows it.

But the Democrats have loyal foot soldiers in every state who can’t help but cause pain to Biden’s opponents.

And Joe Biden’s pals in one deep red state just hit drivers with another ridiculous headache.

Drivers across the nation already have problems as the failed Biden presidency has sent gas prices through the roof with no end in sight.

But Democrats at every level of government and in the media are still working hard to prop him up.

Not even Alabama, arguably the reddest state in the country, is immune from petty tyrants in the state government enforcing bad laws.

A local business owner was recently informed that he had to change his custom license plate… or else.

AL.com reported that Nathan Kirk “who personalized his license plate with the acronym LGBFJB, a Don’t Tread on Me image, and the words ‘Let’s go Brandon,’ a phrase popularly associated with a vulgar insult against Joe Biden, has been told by the State of Alabama he must change the plate name or lose his vehicle registration.”

The “Let’s go Brandon” chant became popular after an NBC Sports reporter at a NASCAR event misheard what the crowd was chanting as she conducted an interview at the winner’s circle with driver Brandon Brown.

The chant went so viral that Brown himself scored a cryptocurrency endorsement deal with LGBcoin.

However, NASCAR blocked the sponsor from appearing on Brown’s racecar, and now the state of Alabama is blocking Kirk from having a customized plate.

The Left has been clearly rankled by the chants because they make Biden look bad and the Left understand the power of mockery.

That’s why they do not tolerate humor and satire from the Right.

People who recite the Brandon chant are finding that out in real time, which is why there is such a push to demonize or even censor it.

The letter to Kirk read:

“The Alabama Department of Revenue, Motor Vehicle Division, has determined the above referenced license plate contains objectionable language which is considered by the Department to be offensive to the peace and dignity of the State of Alabama.”

It’s absurd that the acronym in question could be considered “objectionable language,” but it’s clear what’s happening.

Kirk said after receiving the letter:

“Nothing about it is right… Someone at Montgomery, I’m assuming, doesn’t like it, and now they’re throwing a fit… [I]t’s letters… it could be my kid’s initials. It could be my grandmother or grandfather. It’s just letters. It doesn’t spell anything.”

The establishment is doing everything it can to defend Biden, but it’s not working.