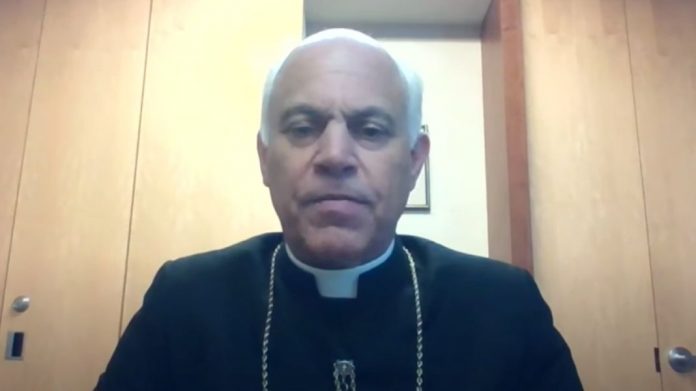 Joe Biden’s pro-abortion, anti-family agenda flies in the face of the Catholic Church.

Yet, he claims to be a “devout” Catholic.

Now Joe Biden may get kicked out of the Catholic Church after what an Archbishop said.

Joe Biden is one of many far-left Democrats who claim to be Catholics.

Along with politicians like Nancy Pelosi, he pushes the far-left’s agenda on abortion and LGBT issues while self-describing himself as faithful Catholic.

Many in the Catholic Church are willing to accept that claim, especially with a left-wing figure like Pope Francis leading the Church.

But there are a growing number of leaders in the Catholic Church calling out Joe Biden.

San Francisco Archbishop Salvatore Cordileone recently spoke out during a TV appearance, stating that Catholics who push the pro-abortion agenda should be denied Holy Communion.

Speaking to Fox News, Archbishop Cordileone explained why the Church only holds that only faithful Catholics can receive Holy Communion, and how pro-abortion politicians should be refused the sacrament.

He stated that “Catholics do not deny fundamental human rights and remain in good standing with the Church.”

The Archbishop went on to state that a person can “absolutely not” support murdering innocent children through abortion and be a faithful Catholic.

“This (the right to life) is the most fundamental human right,” Cordileone said. “Everyone who cooperates in that is involving themselves in a very serious sin.”

Archbishop Cordileone’s message was directed at every pro-abortion politician, but should clearly be felt the hardest by Nancy Pelosi.

Cordileone is her hometown bishop.

Previously, he has made his position clear.

In a recent pastoral letter, which seems as though it was pointed directly at Pelosi, he made his point further, writing, “If you find that you are unwilling or unable to abandon your advocacy for abortion, you should not come forward to receive Holy Communion.”

The U.S. Conference of Catholic Bishops are meeting this week to, among other things, discuss the distribution of Holy Communion to pro-abortion politicians.

Currently, that decision is up to the local bishops and priests.

A priest in South Carolina famously denied Biden Holy Communion as he was on the campaign trail in 2019.

The Archbishop of Washington, D.C. however has publicly stated he will allow Biden to receive Holy Communion.

But depending on this conference, he may be forced to reverse course.