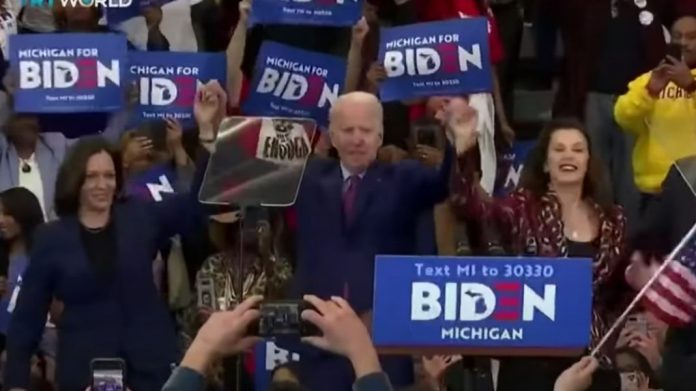 Democrats’ war on Christianity has intensified over the years.

They’ve made every effort possible to secularize the entire country.

But Joe Biden made one comment about religion that left Christians speechless.

The corporate press has been working overtime to prop up Joe Biden’s candidacy despite a mounting number of gaffes and missteps.

Biden’s latest misstep came when he was pandering for votes before the Million Muslim Votes Summit hosted by Emerge Action.

During the event, Biden said, “One of the things I think is important, I wish we taught more in our schools about the Islamic faith.”

Considering Democrats have fought tooth and nail to jettison all Christianity from schools, calling for Islam to be taught was a slap in the face to Christians.

It doesn’t take much to imagine the level of outrage if Biden replaced “Islam” with “Christianity” in that sentence.

Teaching “more in our schools” would be tantamount to proselytizing.

Meanwhile, any trace of Christianity must be stamped out.

In Georgia, activists even fought to stop high school football players from voluntarily praying with their coach after games.

Democrats attack the values of Christianity, but ignore the anti-progressive elements of Islam.

Muslim women – even in the West – are compelled to wear the hijab, and homosexuality is a death sentence in many Muslim majority countries.

However, a Christian baker choosing not to bake a custom cake for a gay wedding is treated as a national scandal.

Biden’s pandering didn’t seem to please the far-left Muslim activist Linda Sarsour, who said, “I choose Biden . . . But I choose him as my opponent in the White House. I want him to defeat Trump so we can mobilize our movements to hold him accountable and push him to do and be better. We can’t do that with Trump.”

So Sarsour and other activists openly believe Biden can be pushed around to suit their political aims.

That’s troubling, because Sarsour is a particularly vile political figure.

She once called for “jihad” against the White House, told Muslim immigrants not to assimilate to American culture, and made lewd comments on Twitter aimed at Ayaan Hirsi Ali and Brigitte Gabriel, two women who fled Islamic terrorism to come to the United States.

The Left’s coziness toward Islam and antipathy toward Christianity shows a deep problem in leftist thought.

They want to tear down all the foundations of the country, and a Christian ethos is a huge part of it.