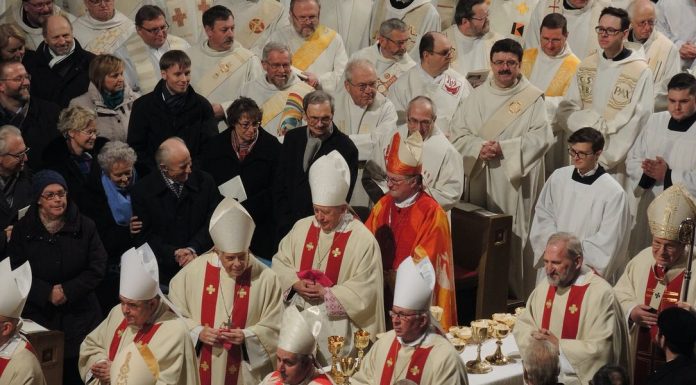 After attacking President Trump for putting himself forward as a Christan, now the Fake News Media is praising Joe Biden as the poster child for Christianity.

But not everyone is buying into their fake news.

And Joe Biden just got demolished by Catholic Bishops for what he wants to force taxpayers to do.

For years, the Fake News Media and the Left has ruthlessly attacked conservatives for their Christian beliefs.

And it just got worse over the past four years as they moved President Trump in their crosshairs for putting forward policies that mirrored his faith.

To the Left, it was an insult to the Presidency to have someone using faith as a guiding principle.

But now that Joe Biden is President, that’s all changed.

Now the Fake News Media and the Left can’t get through the day without telling you about Joe Biden being a “devout Catholic.”

And even Joe Biden’s Press Secretary, Jen Psaki, has to mention Joe Biden’s “devout Catholic” faith when questioned about his support for abortion.

But Biden can't be a "devout" Christian when he's about to force Christians to fund killing babies in abortions!https://t.co/cibpvgrjQdpic.twitter.com/mIxbp5xXLn

But not everyone is buying into that lie.

And now Biden is getting called out for going against his Catholic faith by the Catholic Bishops’ Conference of the United States (USCCB).

After Joe Biden signed an executive order that did away with the Mexico City policy, which banned federal tax dollars from funding abortions overseas, the largest organization of Bishops in America released a statement condemning his actions.

In the statement the USCCB stated that “it is grievous that one of President Biden’s first official acts actively promotes the destruction of human lives in developing nations.”

The statement continued by saying “this Executive Order is antithetical to reason, violates human dignity, and is incompatible with Catholic teaching. We urge the President to use his office for good, prioritizing the most vulnerable, including unborn children.”

We all know Joe Biden doesn’t care about standing with the Catholic Church and Christians across our nation who are adamantly against killing babies in the womb through abortion.

But don’t hold your breath if you are waiting for the Left to stop playing his “devout Catholic” card anytime soon.