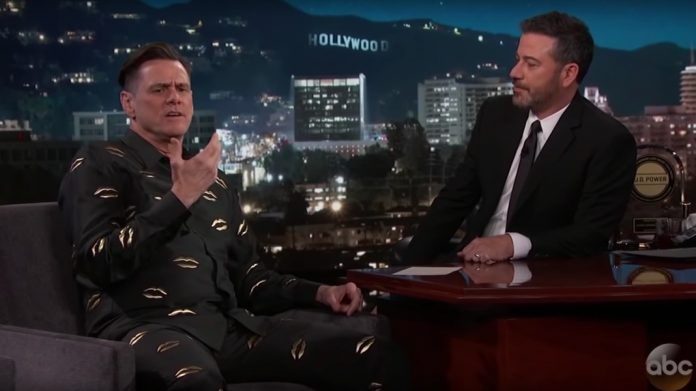 Being far-Left is essentially a requirement to work in Hollywood.

Top Hollywood stars are racing to see who can go further to the Left.

And Jim Carrey just crossed an unthinkable line by saying one thing about a Muslim terrorist.

With his acting career seeming to wind down, Jim Carrey has found his new passion through art.

Some cross the line, like a “monstrous” painting of Sarah Huckabee Sanders.

But nothing goes as far as the painting directed at Senate Majority Leader Mitch McConnell.

It is a pro-gun control piece of “art,” and featured a $100 bill being dipped in blood, along with the caption stating that McConnell is worse than Islamic terrorist Osama Bin Laden.

Actor Jim Carrey sent out a photo Wednesday of a painting with a $100 bill being dipped in blood with a caption that said Senate Majority Leader Mitch McConnell is worse than Osama Bin Laden.

“10,000 gun deaths in 2019 and the year is far from over. What Osama bin Laden did to us was terrible but he doesn’t hold a candle to Mitch McConnell,” Carrey wrote on Twitter.

10,000 gun deaths in 2019 and the year is far from over. What Osama bin Laden did to us was terrible but he doesn’t hold a candle to Mitch McConnell. pic.twitter.com/o68JXxWlUX

Carrey has come under fire for many of his paintings and tweets aimed at members of the Trump administration, such as a “monstrous” portrait of former White House Press Secretary Sarah Huckabee Sanders, he tweeted out in 2018. Carrey has also been vocal about gun reform, tweeting out a disturbing photo of a dead school girl laying in a pool of blood on top of the American flag.

McConnell said Tuesday that he would be willing to put a gun bill on the Senate floor, but only if President Donald Trump will sign it. This causing outrage from many on the left, who say gun reform legislation needs to happen now.

Bin Laden and his terrorist organization, Al-Qaeda, were responsible for the terrorist attack on 9/11 that killed thousands of American citizens.

McConnell has done nothing close to that.

In reality, his only crime in the eyes of Carrey is that McConnell disagrees with his radical beliefs.

Do you think Jim Carrey crossed the line?