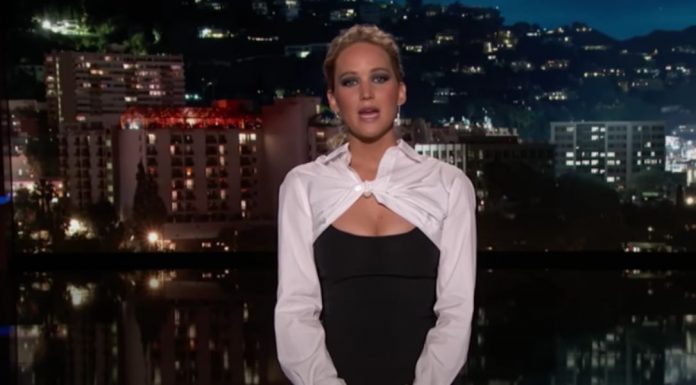 But superstar actress Jennifer Lawrence had a conservative upbringing, she has bought into all of the precepts of the Left.

And she just made a shocking confession about the conservative megastar of her dreams.

Actress Jennifer Lawrence has been radicalized by the Left in Hollywood.

Despite her conservative upbringing, she has bought into all of the precepts of the Left.

She confessed as much when she talked about the 2016 election causing a rift in her family because of her newfound political beliefs.

And Lawrence also revealed that she had a recurring nightmare about Fox News host Tucker Carlson.

Vogue reported that “much of her disappointment was directed at certain relatives back in Louisville, Kentucky, where she’d grown up, including her father. The 2016 election had torn open a rift in her family. Repairing it was an ongoing process. Particularly since having a baby, she had been trying to heal. She even discussed with her therapist the recurring nightmares she has about Tucker Carlson…Lawrence had a haunted look in her eyes. She would stop at times to apologize or make a self-deprecating joke, then get visibly overtaken by emotion again. I felt like I was watching a real-life version of whatever it is that happens when she acts.”

The fact that Lawrence is so bothered by a news host with differing opinions shows how unhinged the Democrats have become.

Leftists cannot handle anyone who disagrees with them, even family members.

Lawrence elaborated on the political divide with her family, saying, “I just worked so hard in the last five years to forgive my dad and my family and try to understand: It’s different. The information they are getting is different. Their life is different…I’ve tried to get over it and I really can’t. I can’t. I’m sorry I’m just unleashing, but I can’t f*ck with people who aren’t political anymore. You live in the United States of America. You have to be political. It’s too dire. Politics are killing people.”

Lawrence is so arrogant that she believes her family members are the one with the issue.

Lawrence added, “I don’t want to disparage my family, but I know that a lot of people are in a similar position with their families. How could you raise a daughter from birth and believe that she doesn’t deserve equality? How?”

Lawrence has a vague concept of “equality” because women have had equal protection under the law for many decades.

What feminists like Lawrence typically mean regarding equality is the gender pay gap, which has been debunked since at least the early 1980s.

Lawrence continued, “Nobody likes to see half their paycheck go away, but it made sense to me. Yeah, for the greater good, I guess it makes sense.”

The “greater good” has been invoked as the justification for all kinds of waste, fraud, and abuse at the hands of big government.

Before the 2020 election, Lawrence got questioned about her past voting record, and she said, “I would like to clarify my voting record, which is the subject of many circulating headlines. I grew up in a republican family and voted for John McCain in 2008, but through Obama’s presidency, and growing up to realize I was voting against my own rights, I am proud to say I am a Democrat.”

Lawrence has definitely been in the Hollywood echo chamber for far too long.