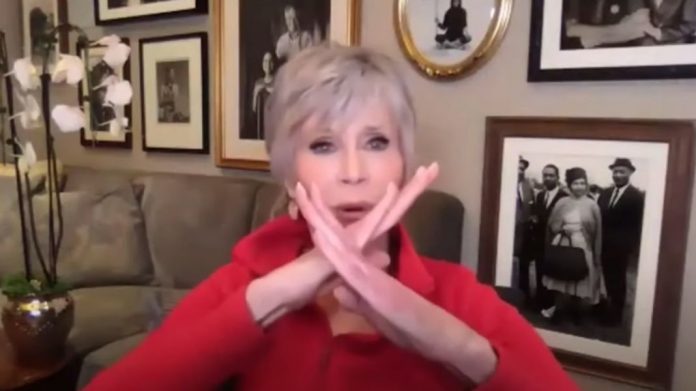 Actress Jane Fonda has a long history of being a brain-dead leftist.

She received the nickname “Hanoi Jane” after sitting on a Vietcong anti-aircraft gun while visiting American prisoners of war.

But Jane Fonda just said something unforgivable about the ongoing public health crisis.

She recently said during a rant that COVID-19 was “God’s gift to the Left.”

“What a great gift!” Fonda said. “What a tremendous opportunity! We’re just so lucky! We have to use it with every ounce of intelligence and courage and wherewithal we have, because you’re absolutely right.”

That is a sociopathic response to a global pandemic that has killed 1 million people worldwide.

“This is it. I just think COVID is God’s gift to the Left . . .” Fonda continued. “It’s a terrible thing to say. I mean, I think it was a very difficult thing to send down to us, but it has ripped the Band-Aid off who [Trump] is and what he stands for and what is being done to average people and working people in this country . . . So I feel so blessed to be alive right now.”

Fonda’s comments illustrate just how much Donald Trump dominates the thinking of the Left.

For them, politics is religion, and Trump represents a heretic.

Not only can they stand not being in power, they can’t stand that an outsider like Trump has been so effective.

The economy was roaring along with record-low unemployment numbers before the coronavirus came to our shores.

And the Democrat plans to “stop” the spread of the virus are all actions the Trump administration has already undertaken.

On top of that, the Democrats were too busy with their sham impeachment spectacle at the onset of the pandemic to prepare for the possibility it could take hold here in America.

The coronavirus has shown that Democrats will do anything for power, and they’re more than willing to exercise that power in draconian ways once they get it.