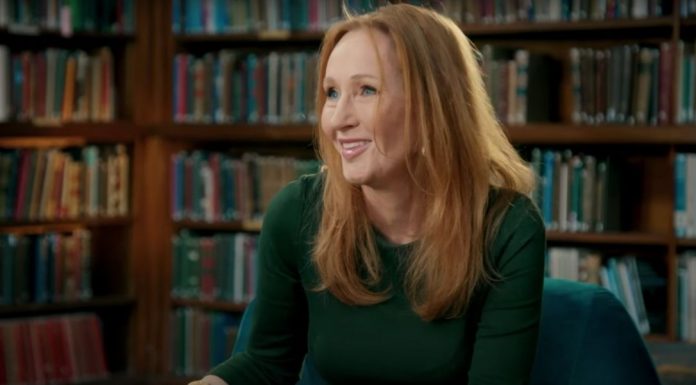 She simply refuses to bend the knee.

And Rowling sent the Left into a furor with seven words.

J.K. Rowling sent the Left into a frenzy when she came out as a “TERF” (trans-exclusionary radical feminist), a derogatory term for progressive women who are not on board with the trans activist belief that biological males can become females.

Rowling’s stance represents the split between second-wave and third-wave feminists.

And despite being slandered and threatened with death, Rowling persists in her beliefs, and does vocally.

On International Women’s Day, Rowling cheekily described it as “We Who Must Not Be Named Day.”

Apparently, under a Labour government, today will become We Who Must Not Be Named Day.

That really drove the Left insane.

The lefitst “thought leader” tweeted, “All J.K. Rowling had to do was shut the f*ck up and she could have been almost uncritically beloved for like a century. Women be quieter and start apologizing challenge.”

That prompted Rowling to eviscerate him:

“What you and your ilk fail to appreciate is how tediously familiar I find your tactics. I had a violent ex-husband who used to tell me life would be great if only I’d comply, but you’re making the same mistake he did. Women like me can’t be bullied out of resistance.”

What you and your ilk fail to appreciate is how tediously familiar I find your tactics. I had a violent ex-husband who used to tell me life would be great if only I’d comply, but you’re making the same mistake he did. Women like me can’t be bullied out of resistance. pic.twitter.com/039pBtFtNT

Vaush answered with a mind-numbing reply:

“Listen Joanne you don’t get to play the victim card when you’re the advocate for taking away women’s rights here… Trans women are raped and killed in men’s facilities and you want to keep them there because of your trauma. Quit making your feelings other people’s oppression.”

Of course, he leaves out that after prisons started putting biological males masquerading as women into women’s prison populations, many of those men have raped and even impregnated female prisoners.

And “Quit making your feelings other people’s oppression” – feelings are all leftists like him usually scream about.

That is what leftists do all day, everyday.

And even more scarily, Vaush also apparently thinks that possessing child pornography should be legal, so it’s hard for anyone to think he is anything but a through and through scumbag.

Vaush is a suspected pedophile by the way. He’s admitted to pleasuring himself to sexualized cartoon illustrations of children, and says it shouldn’t be a crime to possess child pornography. pic.twitter.com/Ah2IEtneFc

Such disgusting views are becoming widely accepted among the left-wing thought leaders today – which many consider Vausch a part of.

It should scare everyone that such people are driving policy for the Democrat Party.

It would’ve been easy for Rowling to go along to get along.

She’s a billionaire author who was a darling of the Left not so long ago.

Since her principled stance on biological reality, she has been ostracized by liberals, even the cast she made famous.

Rowling was conspicuously absent from the Harry Potter 20th reunion, and unhinged leftists tried to get her dropped from her book publisher.

These trans activists are insane, and they have cudgeled many on the so-called mainstream Left into compliance.

But Rowling and a few other public liberals are unwilling to cower to the mob.