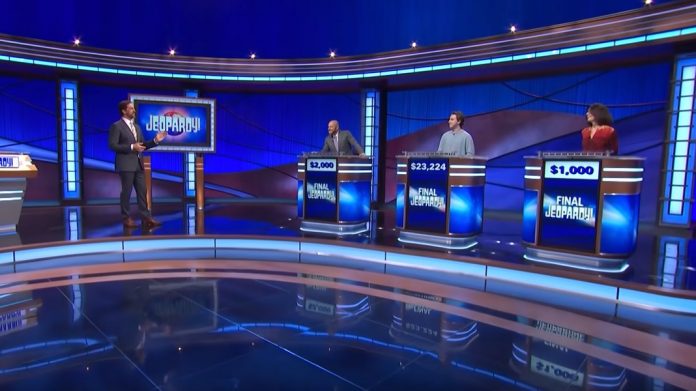 The late host of Jeopardy! made jests about lots of contests but he was a class act who showed respect for everyone who appeared on the show.

But the world has turned upside down.

Amy Schneider was a contestant on Jeopardy! recently and has had an impressive winning streak.

The media proudly declared that Amy Schneider earned more money than any female competitor in the show’s history.

Just one problem – Schneider isn’t the so-called “winningest female ever” on Jeopardy!

In fact, it’s hard to imagine Alex Trebek uttering those three words because Amy Schneider is a transgender woman and is in actuality a biological male.

Sadly, Jeopardy! is going all-in on the woken derangement.

“Jeopardy! invited Schneider to come on the show and is touting his appearance. For example, the show’s Twitter site retweeted the The Daily Beast article as well as an interview by the pro-transgender advocacy group GLAAD.”

Schneider isn’t a woman, in fact.

This should mean that Schneider can’t possibly take the title away from a biological female, but the world we live in now is bizarre and the woke mob forces people to believe things that are just factually incorrect.

Larissa Kelly previously held the distinction as the woman with the highest all- time winnings.

Kelly took to Twitter to congratulate Schneider, “Well, it was fun to hold a Jeopardy! record for a few years…but it’s been even more fun to watch @Jeopardamy set new standards for excellence, on the show and off. Congratulations to Amy on becoming the woman with the highest overall earnings in the show’s history!”

Schneider is NOT a woman! It’s absolute insanity to think that biological men are stealing titles from biological women and the world is just letting it happen.

The insanity must stop.

Not only are women’s sports being overtaken by biological men, but now game show titles are being stripped from actual females because a man feels like dressing up for a day.

The Left wants everyone to accept the unscientific belief that you can be whatever gender your heart desires.

The transgender “equality” lobby is trying to force people to believe that it’s okay for biological men to compete with women.

The push to allow biological men to compete as women has people on the Left and Right up in arms because of the clear advantage men have physically.

But transgenders and the Left aren’t just demanding everyone deny reality when it comes to sports titles anymore.