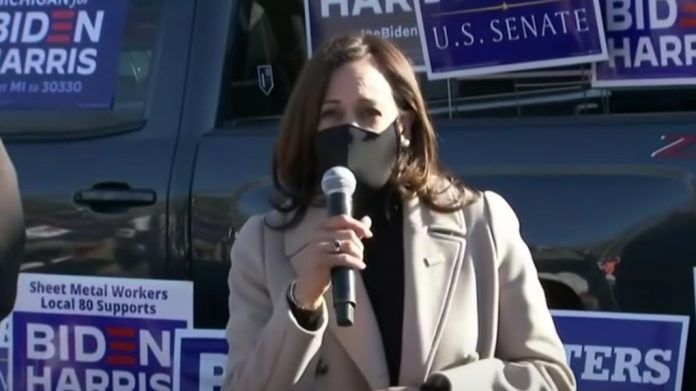 Their diplomatic and international failures have all foreign powers shaking their heads and some flat-out plotting to undercut US interests.

It’s hard to decide whether the Biden administration has something against the French—or if they’re even more clueless than we could possibly imagine.

At any rate, sending Kamala Harris to smooth things over with the French will go in the books as one of the worst diplomatic blunders ever.

And you won’t believe the grade-school-level stunt she pulled.

Democrats who used to fume about Donald Trump being an “international embarrassment” have to be desperately wishing they could take back their Biden/Harris vote.

Trump was known for going all out to impress foreign leaders with his family’s cultural knowledge and sensitivity.

The most impressive example was when his young granddaughter sang important cultural songs and recited poetry in perfect Mandarin for the President of China.

In contrast, a video recently surfaced proving that the Biden Administration is completely tone deaf when it comes to other cultures.

The administration had already accomplished the unthinkable by making one of our closest and oldest allies so angry France pulled its ambassador out of the US.

The move came after Joe Biden couldn’t even bother calling French officials to let them know they were being cut out of a nuclear submarine contract with Australia.

Naturally, the US needed to make amends.

We did not need Harris to make fun of the French by adopting a fake accent in front of a bunch of scientists while making awkward gestures that make it look like the VP is doing her best to make fun of non-native speakers.

You don’t have to be an international expert to know the French are notoriously sensitive about people speaking their language imperfectly—even with honest effort, much less open mocking.

If there’s one thing more shocking than the top politician’s profoundly tone-deaf move, it’s the press’ concentrated effort to play it off as fake.

Of course, she just happened to pronounce “the” as “thee.” Nothing to see here folks!

The only consolation for Americans who would like their country to maintain some semblance of dignity is that Harris’ visit was almost entirely ignored by the French in the first place.