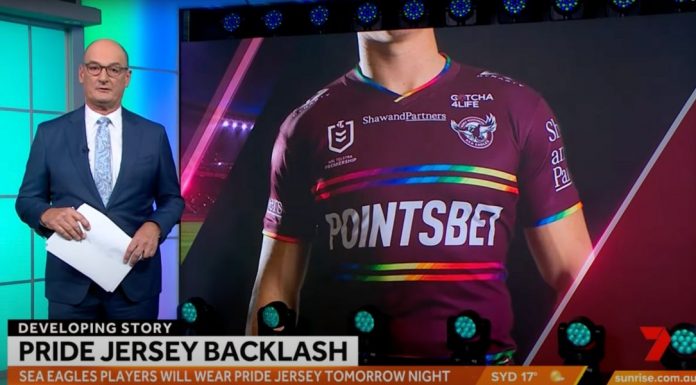 The Left will not stop enforcing their worldview on everyone else.

Not even the sports world is safe but it does expose the Left’s hypocrisy.

Because an indigenous revolt in a massive world sport has the LGBT community furious.

“Wokeness” has run amok in America.

But it does not stop at the country’s borders.

Essentially every western country in the Anglosphere has been infused with radical leftist politics.

And don’t you dare go against whatever is en vogue at the moment with the “flags and pronouns in the bio” crowd, or else…

In the fall, as most Americans celebrate Columbus Day and Thanksgiving, they’ll be forced to hear about colonial oppression of “indigenous” peoples.

So some rugby players in Australia are drawing world-wide outrage for being frustrated over being forced to wear rainbow “pride” jerseys.

The Sydney Morning Herald reported that “seven Manly players will boycott this Thursday night’s clash against the Roosters after being blindsided by the club’s decision to wear a pride jersey as the Sea Eagles’ season descended into chaos. Sources with knowledge of discussions told the Herald that Manly coach Des Hasler had told the players he understood the difficult position the players have been put in as a result of the club not consulting them about the jersey, and will support their decision not to play.”

This is precisely how the Left fight the culture war.

They do something transgressive, then accuse others of fighting culture wars or being “bigots” when they’re the ones forcing beliefs on others.

The players are mostly Pacific Islanders who would otherwise be considered members of a favorite leftist identity group known as BIPOC – as in black, indigenous, and people of color.

But since they aren’t on-board with the pride jerseys, the Left can’t take it.

The Sydney Morning Herald added that “it’s understood Josh Aloiai, Jason Saab, Christian Tuipulotu, Josh Schuster, Haumole Olakau’atu, Tolu Koula and Toafofoa Sipley have withdrawn from the match. Manly officials were locked in emergency talks on Monday night with the seven players before the important clash with the Sydney Roosters. On the day the club unveiled their rainbow-themed jersey to celebrate diversity and inclusivity, the Sea Eagles received complaints from the players.”

The same thing happened in Major League Baseball when players for the Tampa Bay Rays chose not to wear jerseys with rainbow patches for Pride Month. Similar to the pushback the rugby players got, leftists went ballistic.

“Woke” ESPN commentator Sarah Spain said, “Pride is about inclusion, so you don’t love them, and you don’t welcome them if you’re not willing to wear the patch… This is not just about baseball. That religious exemption BS is used in sports and otherwise also allows for people to be denied health care, jobs, apartments, children, prescriptions, all sorts of rights. And so, we have to stop tiptoeing around it because we’re trying to protect people who are trying to be bigoted from asking for them to be exempt from it when the very people that they are bigoted against are suffering the consequences.”

The Left use their influence in culture to enforce their far-Left precepts, and people are sick of it.