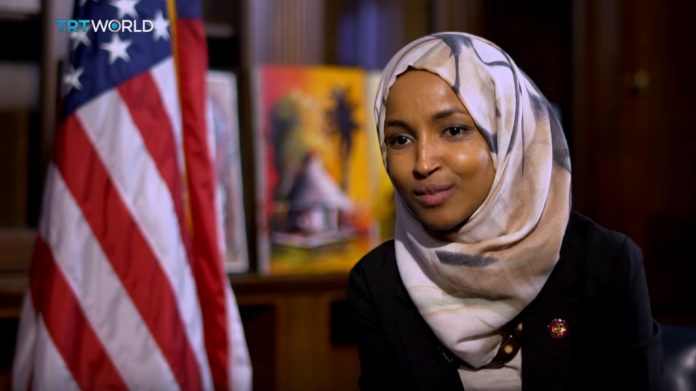 Ilhan Omar has become a complete embarrassment for the Democratic Party.

After disgracing herself by frequently making anti-Semitic comments, she’s decided to double down.

And Omar was caught posting anti-Semitic comments on social media again, but this time it is so bad her career may be going down in flames.

Previously, Ilhan Omar has made comments that offended many people in the Jewish community.

She’s even gone as far to state that some politicians have a greater sense of loyalty to Israel than the United States.

This time, she decided to attack Jewish people using a racial stereotype that falsely accuses Jews of being greedy and obsessed with money.

And people have started to roast her for it.

Rep. Ilhan Omar (D-MN) is again accused of tweeting an anti-Semitic slur, this time over Michael Bloomberg’s re-entry into the race for the 2020 Democratic presidential nomination.

“I wonder why,” Omar noted, adding a “thinking face” emoji.

Cooperman and Bloomberg are both Jewish, and, accordingly, it didn’t take long for social media to get Omar’s drift.

“I suppose you think it’s all about the Benjamins,” Michael Dickson, the executive director of Stand with Us, “a group that fights anti-Semitism,” according to Fox, tweeted in response. “We get your insinuation. True to form.”

This is now a distinct pattern of behavior that we can expect from the first-term Congresswoman.

Even Democrats have distanced themselves from her comments and denounced them as insensitive and prejudiced.

And there are now rumors in the Minnesota Democrat Party ranks that officials are searching for another candidate to replace her.

So far, Nancy Pelosi has neglected to address her most recent anti-Semitic tweet.

If Nancy Pelosi wishes to re-elect Democrats to the House in 2020, she should immediately condemn Omar’s statement and ask her to step down.

Should Ilhan Omar step down over her consistent anti-Semitic comments?