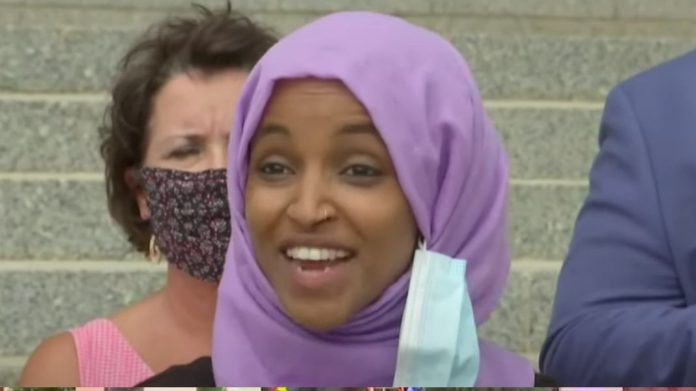 It’s no secret that Ilhan Omar despises the United States and has become unhinged in the wake of George Floyd’s passing.

However, at an event in Minnesota she slipped up in a speech and now all hell is breaking loose.

Ilhan Omar accidentally revealed her radical agenda for the United States and it will leave you in total shock.

Omar’s short time in Congress has been stained with a myriad of embarrassing and even racist statements she made about Israel and Jews.

Not only that, she’s made it clear that she does not possess an ounce of patriotism in her body and once said she was more accepted living in a refugee camp than in the United States.

However, it was not clear until now that she despises everything about the United States and wishes to “dismantle” our political system and economy.

Omar declared, “As long as our economy and political systems prioritize profit without considering who is profiting, who is being shut out, we will perpetuate this inequality. We cannot stop at [the] criminal justice system. We must begin the work of dismantling the whole system of oppression wherever we find it.”

Essentially, Omar is stating that our Constitution, electoral system, and an economy that has lifted more people out of poverty than any other in the world, are not working and she wishes to dismantle these systems in our country.

Omar certainly has the right to be upset with George Floyd’s death.

However, she is attempting to use this high profile case to advocate for the undoing of nearly every institution in our country that has made us the most free and prosperous country in the world.

Ilhan Omar also swore an oath to defend and obey the Constitution when she entered Congress.

Her statements make it clear she has no intention of obeying the Constitution and in fact wishes to undermine it.

The media is of course defending her by stating her words do not specify exactly which systems she wants to dismantle and that they do not have a direct call to action.

But many Americans see Ilhan Omar as a threat to our country’s culture, economy, and Constitution.