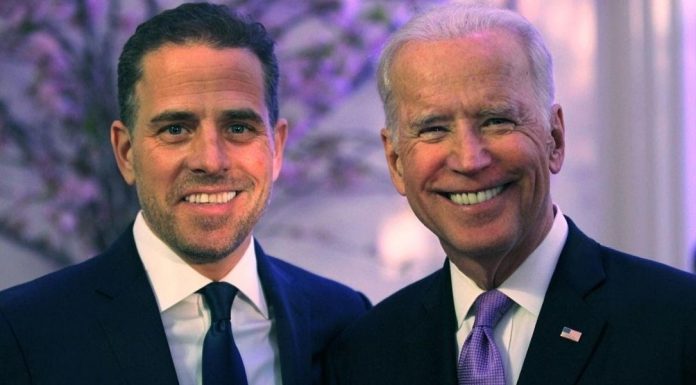 Hunter and Joe Biden got away apparently scot free from one of the biggest Presidential election controversies in recent memory.

And the Bidens looked to be in the clear from any form of prosecution for their shady dealings with China and the Ukraine.

But Hunter Biden may finally be heading to prison after doing this act.

There are many crooked families in Washington, D.C.

But few political families are more corrupt than the Bidens.

Biden’s brothers have been making bank off of his political success for years.

Joe’s brother Jim Biden was the executive Vice President of HillStone International in 2010 when the company was awarded $1.5 billion in contracts from Obama/Biden’s Defense Department for work in Iraq.

And Joe’s other brother Frank Biden was a prominent businessman in Latin America who took advantage of Joe Biden’s Vice Presidential position to get business deals in Costa Rica and Jamaica.

But in the last election cycle Joe’s own son Hunter was a main talking point for the Trump campaign.

Between his drug use, making millions in a shady Ukrainian business, or signing onto deals with members of the Chinese Communist Party, Hunter Biden has enough in his past to put the average person in jail.

But to no one’s surprise, Hunter Biden hasn’t been thrown in jail for his actions.

Well now, Hunter Biden may finally see the inside of a jail cell for lying on a federal firearm background check form.

It was reported by POLITICO that Hunter Biden lied on an ATF Form 4473, the firearm transaction record and background check form, on whether or not he was a drug user.

The main issue of the story was the fact that the Secret Service tried to cover up that Hunter even purchased the gun after it went missing.

But there is one part of the story that many are ignoring.

So basically, Joe Biden and the Democrats are trying to keep guns away from people like his son.

But let’s be honest, if this was an average citizen they would be getting the book thrown at them right now.

Instead, this is Hunter Biden.

Hunter, and the rest of the Biden crime family, will probably not see a day in court since President Joe Biden will do everything he can to protect them.