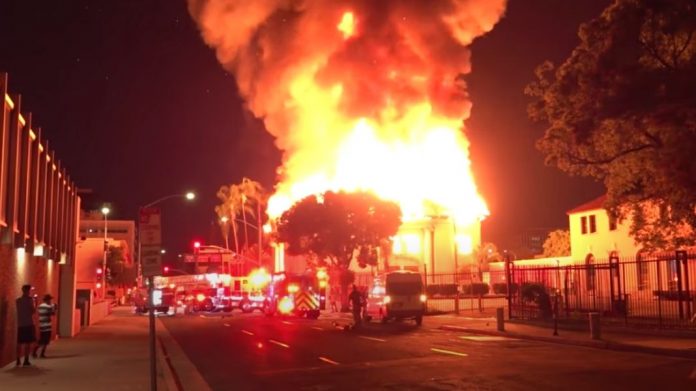 There is a horrifying wave of Catholic Church burnings across Canada.

Dozens have been set on fire in recent days.

And how a top world leader responded will make you sick.

In recent days, the Catholic Church has become the target of intense attacks across Canada following the discovery of 1,100 unmarked graves at the sites of three former residential schools run by the church.

It is alleged that those graves were used to bury indigenous children who were forced to attend the schools, which operated largely in the 1800’s.

Following the news, there has been an all-out assault, directed at all Catholic Churches in the country, resulting in dozens of them being burned down in vicious attacks.

The attacks are being encouraged by left-wing figures in the country.

Harsha Walia, the executive director of the British Columbia (B.C.) Civil Liberties Association, made that clear when responding to a report of two Catholic Churches being burned.

Walia responded to the news report in a Tweet, writing “Burn it all down.”

She is far from alone in her belief.

While she received condemnation from some on the Left, many threw their support behind her violent statement.

In reality, their condemnation is likely based on the fact that she just went a little too far for them.

Because while few major figures on the Left are willing to outright call for more church attacks, they are more than willing to justify the attacks.

Canadian Prime Minister Justin Trudeau, who claims to be Catholic himself, stated that the attacks are “fully understandable given the shameful history.”

Trudeau began by telling reporters that it is “unacceptable and wrong that acts of vandalism and arson are being seen across the country including against Catholic churches.”

But he quickly went on to justify the actions of the arsonists.

Trudeau added, “One of my reflections is I understand the anger that’s out there against the federal government, against institutions like the Catholic church; it is real and it is fully understandable given the shameful history that we are all becoming more and more aware of, and engaging ourselves to do better as Canadians.”

The Prime Minister also called on Pope Francis to visit Canada in order to apologize for the “trauma” the church brought upon tribal natives.

There is no indication the attacks on Catholic Churches are slowing down, and all that the officials of Canada seem to want to do currently is apologize to the attackers.