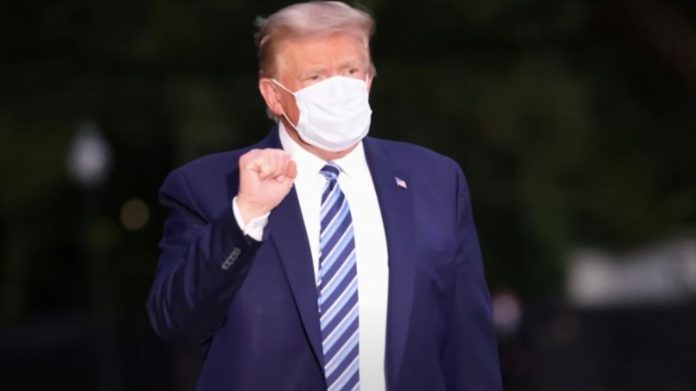 Whenever Trump says something, celebrities scurry to Twitter to see who can deliver the most unhinged Trump comment.

And Hollywood went completely insane after Trump issued this statement.

Donald Trump shocked the world when he announced that he had contracted the coronavirus.

After spending a few days at Walter Reed Medical Center, Trump returned to the White House and gave a hopeful message about the virus.

That message, of course, drove all of Hollywood up a wall.

Only shrill leftists can turn an upbeat message about the coronavirus into some diabolical statement.

Trump was making the point that people cannot live in abject fear because of the virus.

That doesn’t mean people shouldn’t take necessary precautions based on individual risk factors, but people still have to find a way to enjoy life.

That’s the type of “temperate” response people can expect from the elites.

Others in Hollywood veered into full-blown conspiracy land.

Some argued that he faked having the virus and/or he faked his recovery from the virus.

Actress Mandy Moore’s tweet that checked off all the progressive boxes is particularly galling because she mentioned the economic devastation of lockdowns, but it’s the Left that is determined to keep the lockdowns going indefinitely.

Small business owners have been fighting for the right to stay open when pro-lockdown politicians and celebrities have been trying to scare people indoors forever.

Everyone understands that the coronavirus is serious, but Trump has said time and again he’s a cheerleader for America.

He wants the country to do well and he wants people to be in good spirits.

Meanwhile, Hollywood wants people to live in a constant state of misery so long as a Republican is in the White House.

Despite the screeching from the Left, most Americans are ready to resume their lives.