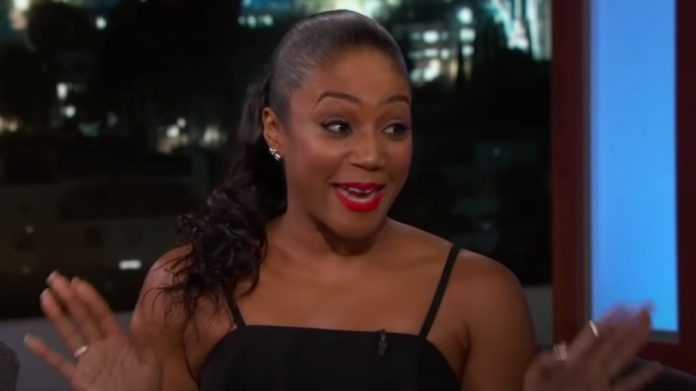 Hollywood has been anti-family for decades.

But now they’re outright shaming Americans for having children.

And the reason one celebrity gave for why she won’t have a family will make your jaw hit the ground.

Hollywood has been infected by a mental disorder.

It may have started out as Trump Derangement Syndrome, but the pandemic of Social Justice Warrior-insanity has only gotten worse.

The latest manifestation is with the celebration of not having children.

Actress and comedian Tiffany Haddish went on a podcast with NBA player Carmelo Anthony to explain why she won’t have kids.

The 40-year-old “Girls Trip” actress lamented, “I would hate to give birth to someone that looks like me, and then, knowing that they’re gonna be hunted or killed.”

“Like, why would I put someone through that?” Haddish added.

Sadly, the media’s constant fear mongering now has many Americans – not just celebrities like Haddish – second-guessing bringing children into the world.

They seem to believe that racist cops will hunt down black kids and murder them in cold blood.

What happened to George Floyd was clearly wrong and a tragedy.

But according to actual data, not CNN fear-porn, 14 black and 25 white unarmed victims have been shot and killed by police in the past year nationwide out of over roughly 375 million police-civilian interactions per year.

And the FBI found that 89 law enforcement officers were killed in the line-of-duty, including 48 by felonious acts, in 2019.

Not bringing babies into the world won’t stop that.

But it’s not just so-called “systemic racism” that’s stopping some women from refusing to have children, it’s also global warming.

A new movement called “BirthStrike” is shaming women who contribute to the “climate breakdown and civilization collapse” by having kids.

They believe men are the root of all evil in the world.

Being a parent is a commitment and it takes work.

But most parents agree raising children and grandchildren is the most rewarding part of their lives.

Nothing can replace hearing that first laugh, watching them take their first steps, or seeing them grow up and mature.

Sadly, Hollywood and the media are scaring many into missing out on the experience of parenting.

Culture Watch News will keep you up-to-date on any developments to this story.