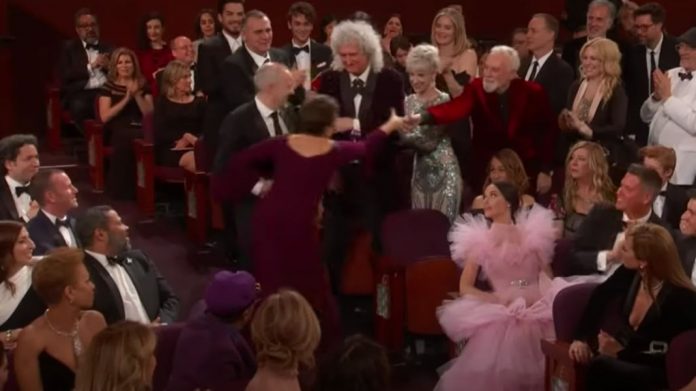 Hollywood is as far-left as you can get.

So it isn’t shocking that they team up with the Democrat Party.

And Hollywood liberals are teaming up with John Kerry in a left-wing scheme you won’t believe.

Few figures in Washington, D.C. are as untrustworthy as John Kerry.

While serving as Joe Biden’s “climate czar,” he continued to fly around the world on private jets.

And as he pushed Democrat mask mandates, he continued to be caught in public places maskless, including in airports, where Biden has ordered everyone be forced to wear them.

He believes that the rules he and his friends create don’t apply to him.

So it isn’t shocking that he fits right in with the liberal elites in Hollywood.

They scream from the rooftops for left-wing regulations on everyone’s lives, while they themselves do whatever they want.

And just this week, a ton of the biggest names in Hollywood teamed up with John Kerry to push the far-left’s climate change agenda.

Kerry teamed up with Seth Meyers, Trevor Noah, Jimmy Fallon, Stephen Colbert, James Cordon, Jimmy Kimmel, and Samantha Bee, who have a collective net worth of roughly $388 million, for “climate night,” which involved them devoting their shows to promoting climate change.

“All of us at #LNSM are excited to join @fallontonight, @thedailyshow, @colbertlateshow, @latelateshow, @jimmykimmellive and @FullFrontalSamB for #ClimateNight tomorrow! Check out @SethMeyers’interview with @JohnKerry on 9/22,” Late Night with Seth Meyers tweeted Tuesday.

Jimmy Kimmel stated that he was participating because he “[doesn’t] want to die.”

“I’m thrilled to participate in ‘Climate Night,’” Samantha Bee said. “But maybe we should move it up a few days? Just because, you know, it’s urgent?”

Late show host Stephen Colbert said that he is “proud to dedicate one entire night of my show to the climate, so I can say I wasn’t part of the problem, I was 1/365th of the solution.”

With all of these figures being hyper-rich leftists, it isn’t surprising Kerry joined him.

They are all major hypocrites.

While screaming about inequality, they all live in multi-million dollar homes.

Kerry himself has flown his family jet at least 16 times this year alone, despite him constantly warning about a dire climate crisis.