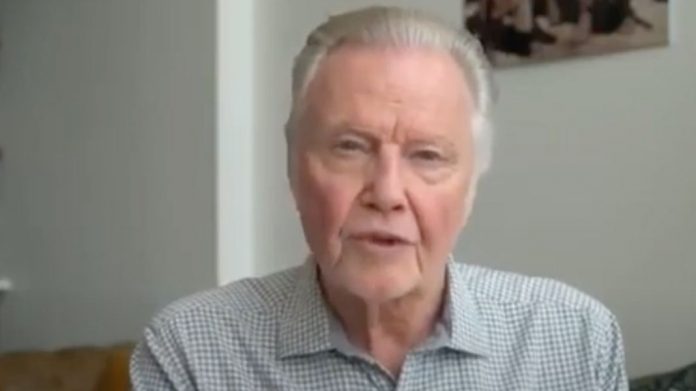 The Republican National Convention (RNC) is in full swing.

Republicans continue to show why their agenda for America is better than the Democrats.

And Hollywood is furious after one of their top stars went to the RNC to say one thing about Trump.

Hollywood is squarely in the corner of Joe Biden.

They are working overtime to rip President Trump from the White House by any means necessary.

Anybody in Hollywood who comes out in support of Trump is sure to lose any chances of future career advancement.

But one thing they can’t control is their veteran stars, who are able to say what they want without fearing their wrath.

That is the case with Jon Voight, who has spent decades as a top star in Hollywood.

He is at the point where they cannot cancel him, which allows him to speak his mind.

So he has come out as a vocal supporter of the President.

And during the RNC he has made that clear, narrating two videos on the first night in support of the President.

“We come together to imagine a future determined by the shining light of our hopes, and values, and faith,” said Voight. “A country where we are judged by our character with dignity and respect for all. The belief that all are created equal, that lives matter irrespective of race, creed, or color.”

“Four years ago we faced a historic crossroad, career politicians promising change every election, but delivering emptiness,” he added. “We chose a different path, a man who is not a politician, a man who cares, a man who loves America, and all Americans — a man who works tirelessly for you.”

Naturally, Hollywood has come out against him.

Frank Whaley, an actor on the show Ray Donovan, which Voight stars in, came out alleging that Voight slapped him during a take on the show, calling him a “major d*ck.”

He is not alone, with other stars in Hollywood furious at him.

They have spent years trying to tear down President Trump, painting him as an evil monster.

But in reality, they don’t understand the good he has done because they are in their elitist bubble.

Trump has been working not for them, but for the working class of America.

Voight has spent many of his roles portraying working-class Americans, and seems to understand that Trump is working in their best interest.