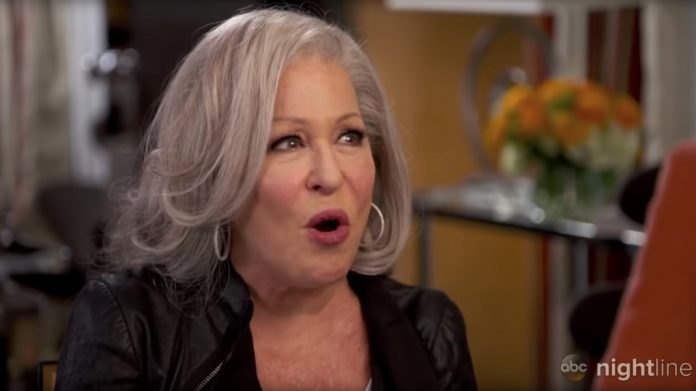 Hollywood celebrities are up to their nonsense again.

It doesn’t take much to work them into a rage.

And one Hollywood diva is trying to start one hilarious boycott.

If there’s one thing that angers leftits, it’s telling them that killing babies is against the law.

Democrats hold abortion as a sacrement, which is creepy and weird.

In the wake of Texas’ law that allows people who aid abortion to be sued, “woke” actress and singer Bette Midler proposed a zany sex strike to advocate for abortion.

I suggest that all women refuse to have sex with men until they are guaranteed the right to choose by Congress.

The Left has rejected that idea of teaching that in schools for years, instead demanding abortion-on-demand.

Midler has routinely jumped on left causes over the past five years.

Abortion is simply the one that gets the Left the most fired up.

Midler was almost one-upped by fellow virtual-signaling derangement actress Rosanna Arquette, who made some incoherent “joke” about Texas law.

but then again men with angry Guns and rape not being a much of a crime in Texas .watch this space

Arquette also said she turned down a job in Texas in order to boycott.

Conservatives are probably hoping the Democrats do boycott.

The move would likely work out about as well as the failed Georgia boycott over election integrity laws.

Leftists, particularly radical feminists, are obsessed with the idea of sameness.

They want “equity” and equal outcomes with men in every regard, which includes being able to have “consequence-free” sex.

But the leftists’ pursuit of “equity” is psychotic.

Democrats have become ghoulish on the issue of abortion.

They don’t even pretend that the “safe, legal, and rare” doctrine applies today.

What the Left clings to now is the insane notion that pro-life advocates not wanting to kill babies equates to wanting to control women.