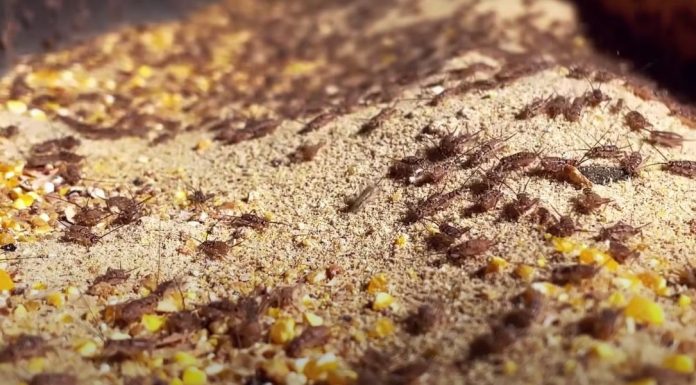 Elites have utter contempt for the average person.

They believe they should be in control of everyone’s lives.

And they are pushing for something utterly skin crawling.

The wannabe masters of the universe are obsessed with climate change.

That’s because fears over a warming climate provides a pretext for seizing control of the global economy.

And one of the ways that globalists want to reduce emissions that they insist contribute to changes in the climate is to cut down on farming, particularly cattle.

That’s right — the global elites are still trying to make everyone deathly afraid of cow farts.

Instead of delicious buttery beef, they want people to get accustomed to eating bugs.

And now PBS is using taxpayer dollars for an all-out push for this nonsense.

From crunchy crickets to nutty fly grubs, @NOVAPBS takes a tasty look at insect foods and how they could benefit our health and our warming planet.

This is far from the first report priming people for an insect diet.

Children are being indoctrinated with the concept.

The UK Metro reported that “children at four primary schools in Wales are set to take part in workshops organized by scientists and teachers to inform them about the benefits of eating ‘alternative protein’ like bugs. These will include plant-based foods and may involve edible insects, depending on whether they have received Novel Foods approval by the Food Standards Agency. These will be in the form of ‘conventional mince’ which combine plant-based and ‘alternative protein’. A study in the Journal of Cleaner Production found insect farms emit 75% less carbon than poultry farms.”

The idea is gradually being inflicted on the public with a steady stream of manufactured bug meat marketing campaigns.

Would you switch to an insect-based diet? Although insects are viewed as a highly promising solution to the challenges facing the food industry, many Europeans still see them as novelty food at best.

In 2021, there was article after article about eating cicadas.

The Washington Post: “Can you eat cicadas? Yes, and here’s the best way to catch, cook and snack on them.”

USA Today: “Hungry? Cicadas are on the menu as Brood X’s arrival has some foodies buzzing.”

The Chicago Tribune: “The cicadas are coming — and they’re packed with protein and gluten free. Be sure to take the wings and legs off before you cook them.”

Wired: “The Cicadas Are Coming. Let’s Eat Them!”

The message could not be any clearer that the elites want the plebes to eat bugs under the guise of saving the planet from deadly cow farts.

Of course, the special elites will continue to enjoy filet mignon and foie gras and other delicacies because they’re better than you.

But the average Joe will be lucky to eat a Walmart steak with ketchup if the Davos crowd gets its way.