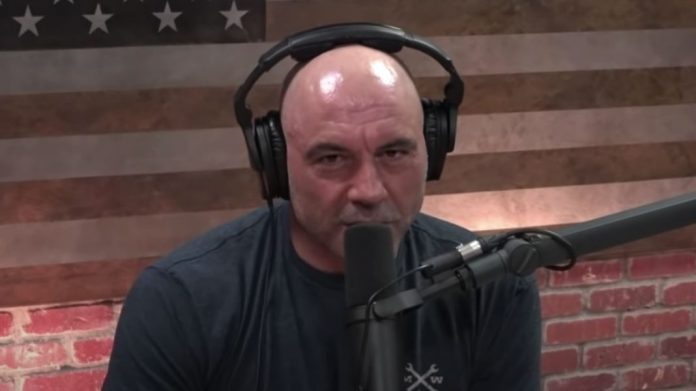 “Woke” radicals are only satisfied if they can ruin somebody’s life and they constantly go after celebrity targets who do not bend the knee.

Wittingly or not, many of these radicals are part of a massive George Soros plot.

But now he is furious at a huge star who exposed an epidemic Soros set in motion.

Number one podcaster Joe Rogan has become a sworn enemy of the radical Left.

The liberal comedian despises the left-wing nutcases, which invalidates all of his left-wing sensibilities.

Now leftists are attempting to get Rogan canceled again by suggesting he wants to shoot homeless people.

During a conversation with fellow comedian Tom Segura, the two talked about how it’s essentially impossible to clear homeless encampments because it’s against the law to remove homeless people’s property.

Nothing like a couple of rich fucks setting around smoking cigars and criticizing people at their rock bottom.
And that last line? "Maybe you should just go S**T the homeless people" pic.twitter.com/eCp1HSkJj4

Rogan and Segura were obviously making a point about how crime is not enforced in cities like Los Angeles.

An “unhoused advocate” named Theo Henderson cynically jumped on the discussion and said, “It’s repulsive…It’s infuriating because it’s not only out of touch, but the reality is that unhoused people are targeted by housed people. To advocate trying to shoot at unhoused people or just giving these dog whistles to people that do not see unhoused people as human beings — I can’t believe you’d advocate for it.”

Henderson is being disingenuous when he suggests that Rogan is sincerely advocating for homeless people to get shot.

Union Rescue Mission President Andy Bales piled on and said, “I’m surprised and saddened… The comments about beginning to kill homeless people hits too close to reality for any comfort, because murders of homeless people in Los Angeles went up 47% last year over the previous year…. There is a bit of an unfortunate vigilantism already in Los Angeles towards people devastated by homelessness and they don’t need any encouragement.”

The suggestion that vigilantism against the homeless is an actual thing and that Rogan’s comments will lead to more of it is absolutely insane.

And again, Rogan’s whole point was that he was appalled by the lack of accountability for violent criminals.

There’s a reason why George Soros-backed DA George Gascón is on the cusp of being recalled.

Angelenos are sick and tired of the homeless camps and violent crime that has spiked in the city.

Defense attorneys have been instructing their clients to cut deals before Gascón gets recalled.

Convicted murderer Luis Angel Hernandez admitted during a recorded prison phone call conversation, “I’m going to get that n****’s name on my face. That’s a champ right there…F***ing Gascón… That’s the n**** right there, bro. He’s making historic changes for all of us, bro.”

That is the social decay Rogan and Segura were commenting on.

And it is social decay set in motion by radical left-wing financier George Soros’ and the policies of the lunatic Democrat politicians he supports.

The Left can’t admit that.

So in the case of Joe Rogan, they’re intentionally smearing his joke so they can cancel comedians who call them out.