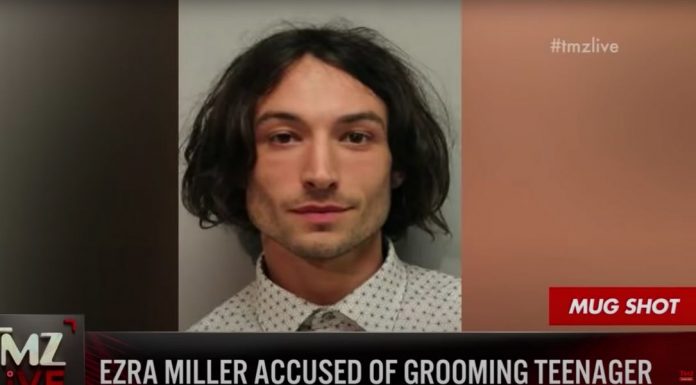 Hollywood elites love to lecture the rest of America.

But the entertainment industry couldn’t be more seedy.

And a fugitive star has gone on the run for a reason that will leave you red with rage.

Actor Ezra Miller, who plays The Flash in the DC Comics cinematic universe, is in trouble with the law again.

Miller has behaved like a trainwreck the last few years, so much so that any and all future Warner Bros. projects involving Miller have been put on hold.

But Miller may have crossed the line this time when he was accused of grooming an 18-year-old girl starting when she was 12 years old.

Now law enforcement cannot find him, suggesting he may be on the run.

Business Insider reported that “law enforcement apparently ‘cannot locate or serve’ the ‘Fantastic Beasts’ star Ezra Miller after the parents of an 18-year-old activist filed a domestic-violence protection order against the actor… The order of protection was granted by a judge in the Standing Rock Sioux tribal court Tuesday… In the order, Chase Iron Eyes and Sara Jumping Eagle — the parents of the 18-year-old Gibson Iron Eyes — accuse the actor of physical and emotional abuse as well as grooming their child… While Gibson Iron Eyes is an adult under US law, the teen remains under parental guardianship under tribal law, which is where the order of protection was filed… Miller and Gibson Iron Eyes both identify as nonbinary and use they/them pronouns.”

There may even be reason to believe that Miller is on the lam with the girl.

Her mother tweeted that Miller “allows” her daughter to use the phone.

In an attempt to dispel rumors, the 18-year-old wrote on Instagram, “I dropped out of bard five months ago, my friend and comrade William passed shortly there after, my mind was incredibly impacted and I’ve needed space and time for the processing of grief. My comrade Ezra Miller for the entirety of the aforementioned era has only provided living support and invaluable protection throughout this period of loss.”

If anything, her use of the word “comrade” and they/them pronouns suggest deep levels of indoctrination and propaganda.

With Ezra Miller on the run, Amber Heard’s reputation in ruin, and director Joss Whedon in the Hollywood doghouse for abusive behavior, Warner Bros. is having a miserable time wrangling its comic book properties.

Hollywood “morality” is on full display.